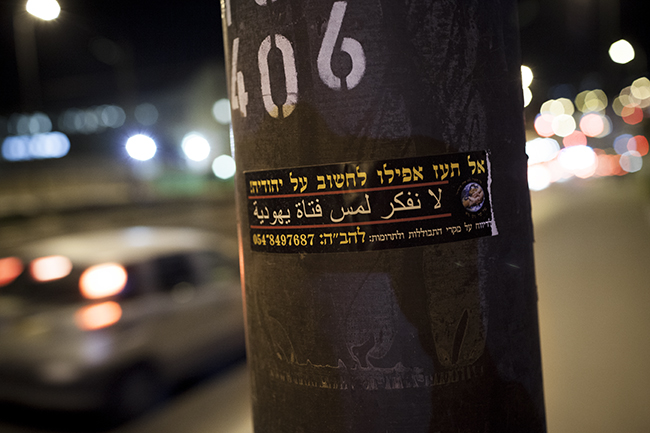 Marrying outside one’s religion has always been and still remains blasphemous in many societies and religious groups, especially throughout the middle-east. But while for Muslims and Christians the issue is in some ways one of religious principle, for Jews it has been more a matter of surviving or not as a distinct tribe, its small numbers lost among the vast sea of the world’s nations. Combined with the status of chosen people, with the deriving responsibilities and expectations, and with the difficulties in ensuring Jewish continuity without a separate homeland while being exposed to (and sometimes inextricably involved with) the surrounding societies, not marrying goyim (non-Jews) become out of necessity one of Judaism’s main imperatives – every Jew has a rabbi among his or her ancestors, goes the saying, but what really matters is to have one among your descendants. And as a child can be Jewish only by virtue of his or her mother, the struggle against intermarriage inevitably focuses on keeping non-Jewish men away from the “daughters of Zion”, which in Israel basically means preventing Jewish women from getting involved with Arabs. At the forefront of this struggle is Lehava, founded and run by disciples of the late Meir Kahane, a radical rabbi known for his uncompromising stance in regard to the conflict with the Arabs and his advocacy for placing Jewish values at the centre of Israel’s policies and legislation – when he was elected to the knesset he refused to take the standard oath of office unless a specific passage sanctioning the superiority of Jewish laws over state laws was added, and then proceeded to propose legislation banning sexual relations between Jews and non-Jews.

In order to protect Jewish women, Lehava works to prevent them from even meeting non-Jewish men, be it at work, on the beach or in a bar. It has called for a boycott against businesses with mixed staff, distributed maps of which shops in Jerusalem’s market can be regarded as safe, and organized demonstrations against renting houses to Arabs in Jewish neighbourhoods. In 2010 it distributed a letter by the wives of many of Israel’s most prominent rabbis urging Jewish women to not date Arabs, arguing that such relationships inevitably end up badly with the women held captive by abusive husbands. Lehava claims to have hazardously rescued hundreds of such women from Arab villages, pointing to what is according to them a problem of great proportions. While domestic violence is undoubtedly a serious issue all across Israeli society, and most likely includes cases involving Jewish women and Arab men, Israeli police has repeatedly denied the existence of any widespread phenomenon like this, and actual evidence is hard to come by, although this can be explained with Lehava‘s efforts to protect the privacy of the girls. Most of Lehava‘s notoriety actually comes from more symbolic actions such as publicly denouncing high-profile mixed couples, or calling on Israel’s super-model Bar Refaeli to refrain from marrying the non-Jewish Leonardo DiCaprio. Reading through the organization’s materials and leaflets, which often feature the Hebrew text more prominently than the Arab one, and listening to the declarations of its director Benny Gopstein, Lehava seems to be just as concerned with fending off the advances of Arab men as with generally raising awareness among the Jewish public about the danger of assimilation through intermarriage, which is apparently totally neglected in the Jewish state. “Millions are invested in preventing assimilation abroad”, Gopstein said in an interview to Ha’aretz, “yet in Israel they don’t invest. Not only they don’t invest, it’s seen as legitimate”.

Establishing a state with a Jewish society where the youth would grow up as Jews, marry other Jews and make Jewish children with them – all by default, was the underlying goal of zionism, which was just as much a solution to anti-semitism as to the European Jews’ persistent tendency to assimilate within their surrounding societies. At the cost of immense efforts and suffering, for Jews and Arabs alike, such state was created in 1948 and it has had a Jewish majority ever since, which questions Lehava‘s claims that intermarriage and assimilation remain a threat and makes one wonder who are the real targets of its work. But maybe the issue is not Jewish continuity per se, but rather what kind of Jewish continuity is being pursued in the state of Israel. One of the main achievements of Zionism has been to transform the scattered members of an ancient people into al nation like all others, with its own state and its own more-or-less defined piece of land. As mentioned before, this achievement did wonders for ensuring the survival and continuity of the Jewish people, yet the transformation on which it was predicated created a new challenge, that of normalization.

The Jewish philosopher Isaiah Berlin used to recall that once he was asked how “Jews, who have had one of the world’s most interesting and distinctive histories, now want to became like Albania” and turn into a normal nation. “To be like Albania”, was the reply, “would be a great improvement for the Jewish people”. While this practical attitude can be credited with saving the lives of millions of Jews, it has come into growing contradiction with the rising religious-zionist movement, and especially with its more right-wing sector made up of Kahane’s followers, with its view of the state of Israel not as a goal in and of itself but simply as a necessary and possibly transient stage in the millenarian history of the Jewish people. At the core of this religious drama, which foresees the redemption of the whole world through the redemption of Am Yisrael (the people of Israel), is the relationship between this small semitic tribe and its God, and at the core of this relationship lies God’s decision to pick the Jews as his own chosen people, separated for eternity from all the nations of the world. For redemption to eventually be granted, Jews must remain aware of and act in accordance with God’s will, striving both to come together as one people and to remain separate from all other peoples – a nation that shall dwell alone.

Within this narrative, the efforts of Jews throughout the centuries to reject intermarriage and assimilation acquire an immense religious significance, and any relaxation of such efforts brought about by the successes of zionism in normalizing the Jewish people goes directly against God’s will and is therefore a threat to that very same Jewish identity which the zionist project was initially supposed to protect. The activities of organizations such as Lehava can therefore be seen as a rejection of the normalizing element of zionism and as a reminder to Jews – and especially to Jewish women, of their special status. “My dear Jewish sister”, reads a letter on Lehava‘s website, “don’t let some minority member bring you down and cause you to be impure. You’re a king’s daughter! The King of Kings! You have the privilege of being holy and pure, you’re a Jewish woman!”