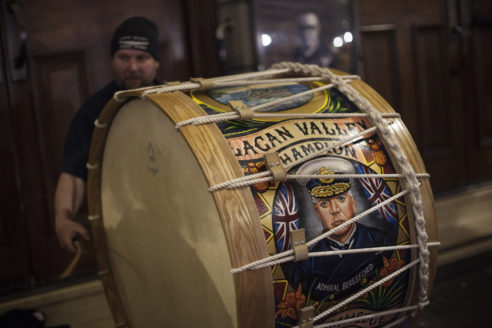 Belfast, 6th of December 2019: A traditional Lambeg drum plays its threatening tune in front of Ulster Hall, in central Belfast, at the opening of a gathering of hard-line Protestants against what they call “the Betrayal Act”, Boris Johnson’s proposed Brexit deal, just a few days before the elections. In face of widespread opposition to the return of a hard land border, British prime minister Boris Johnson has opted to leave Northern Ireland in a customs union with the EU and the rest of the island, in turn infuriating unionists and loyalists.