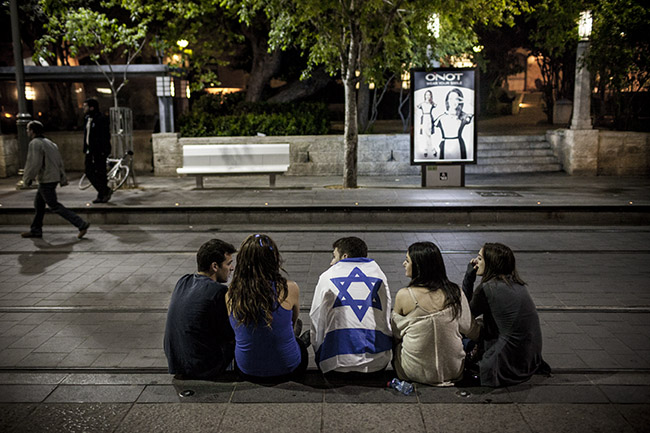 For the 65th time, Israelis marked the Jewish month of Iyyar (which falls between April and June) with two of their most important national days: Yom Hazikaron, the Day of Remembrance, and Yom Ha’atzmaut, the Day of Independence.

Falling one right after the other, these two holidays mark respectively the memorial day for the Fallen Soldiers of Israel and Victims of Terrorism and the establishment of the State of Israel, and come shortly after Pesach, the Jewish Passover festival which celebrates the escape of the Jews from slavery in Egypt, and Yom HaShoah, the Holocaust and Heroism Remembrance Day. Over the course of three extremely charged days, Israelis gather in a myriad of public and private ceremonies and celebrations which make up some of Israel’s strongest traditions. 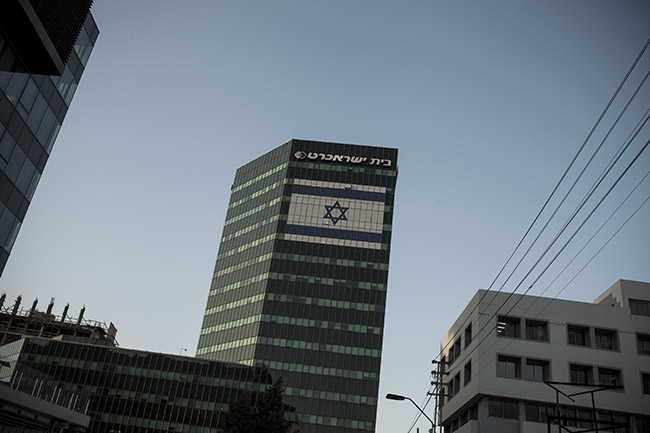 The first sign of what is about to happen is a sudden proliferation of Israeli flags: they are hung in the streets, people put them on their cars or fly them from their windows, while kids sell them at streetlights and banks, post offices or other public institutions hand them out for free. In some ways, the year-round obiquitous presence of the flag in Israeli public space is a leftover from this period of flag-mania. 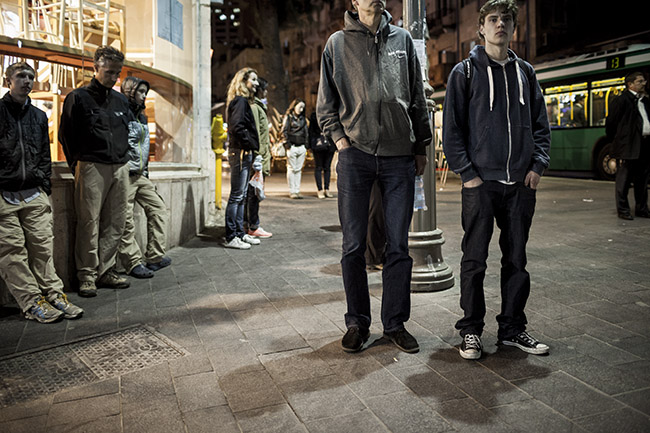 Jerusalemites stand at attention as a siren sounds across the streets of the city marking the beginning of Yom Hazikaron. The sirens, which also used on Yom HaShoah and are usually meant to warn the population of an attack, echo all across the country as everybody stops whatever they are doing to mourn to the thousands of Israelis who have died in service or in terrorist attacks. Not standing during the siren, as some non-Zionist ultra-orthodox Jews do, is criticized as disrespectful to those who died for the collective and can land you in a vicious argument. 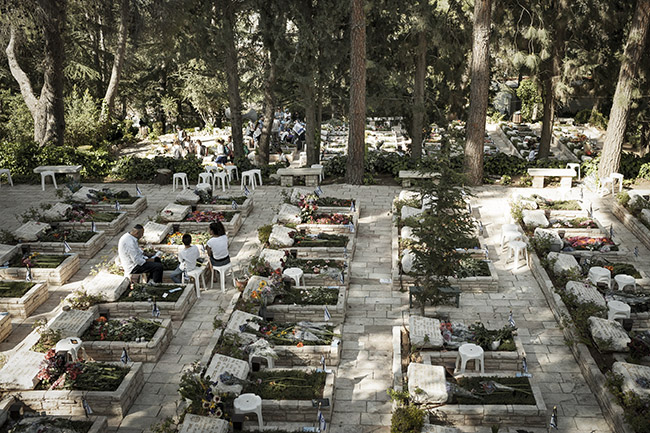 A family gathers to pray on the grave of a relative who died while serving in the army at the Mount Herzl military cemetery in Jerusalem. Thousands of families, youth movements and communities visit the graves of fallen relatives, friends and neighbours on Yom Hazikaron, with public ceremonies attended by the highest authorities of the state. Youth groups are also taken on tours to military cemeteries, with guides telling the stories of those who died heroically in combat or in especially heinous terrorist attacks. 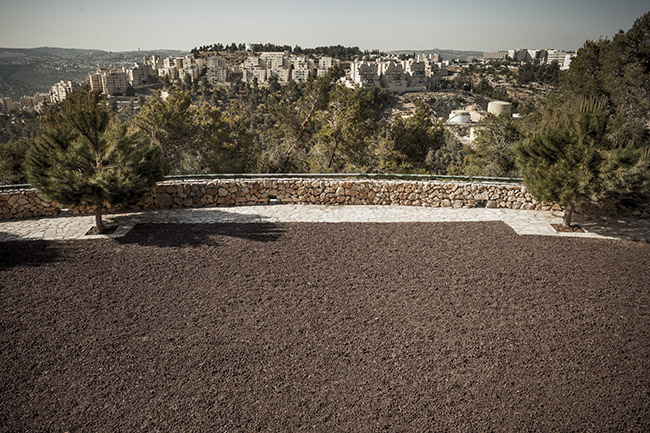 23,085 Israelis have died fighting in the country’s many wars, with another 2,493 killed by terrorist attacks. These dead are at the very heart of the national narrative, constituing both the price paid for the Israel’s existance and an enduring symbol of its inhabitants’ selfless commitment to its defence. Faced with a neverending state of war, Israelis are taught that “ein davar (never mind), it is good to die for our country”, as Zionism’s first warhero Joseph Trumpeldor famously said before dying while defending one of the earliest settlements in Palestine. 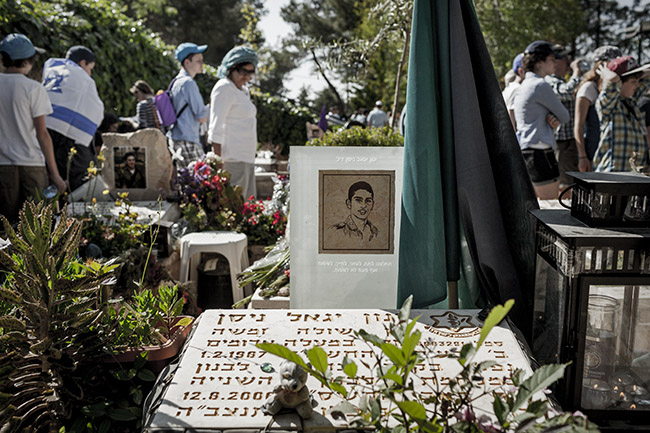 Israel’s strict conscription laws, which commit almost the entire population to three years of compulsory military service for boys and two for girls, mean that death in service is a realistic possibility for practically everyone, as is that of dying in a pigua (a terrorist attack). And because of Israel’s small population size, which means everyone is related to or knows someone who died either at war or in a terrorist attack, death at the hands of the country’s enemies is a collective experience that unites everyone all across society. 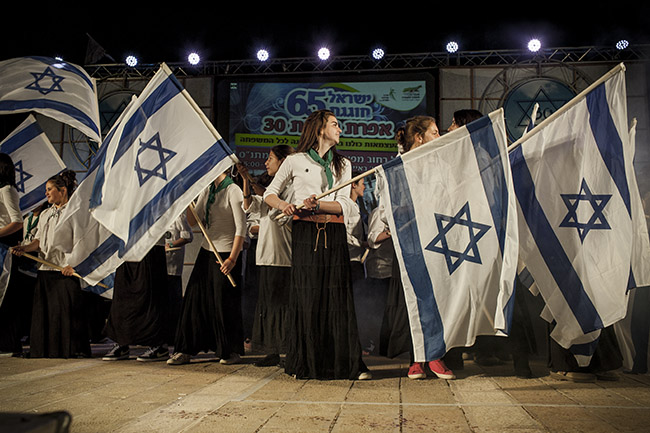 As the sun sets at the end of Yom Hazikaron, a very different type of ceremony begins in Efrat, a Jewish community in the West Bank, marking the festive celebration of Israel’s establishment, Yom Ha’atzmaut. After the somber mood of mourning which marks Yom Hazikaron, Israel erupts in a massive celebration of its own existance. Every city, community or settlement holds an event, with dances, songs and speeches.
And at the center of it all is the blue-and-white Israeli flag. 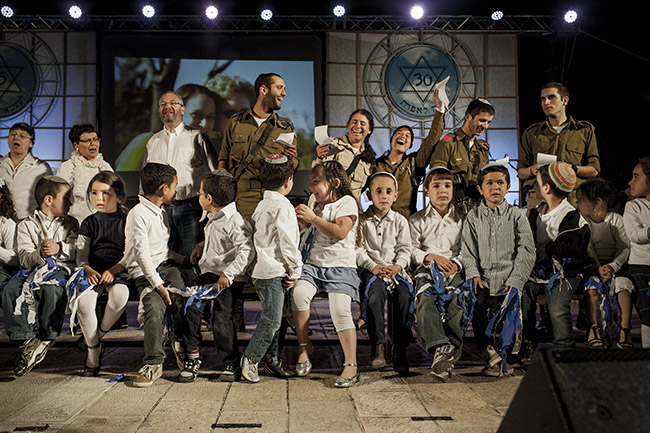 Soldiers sing nationalistic songs during the Yom Ha’atzmaut celebrations in Efrat, which also mark the anniversary of the settlement’s establishment. 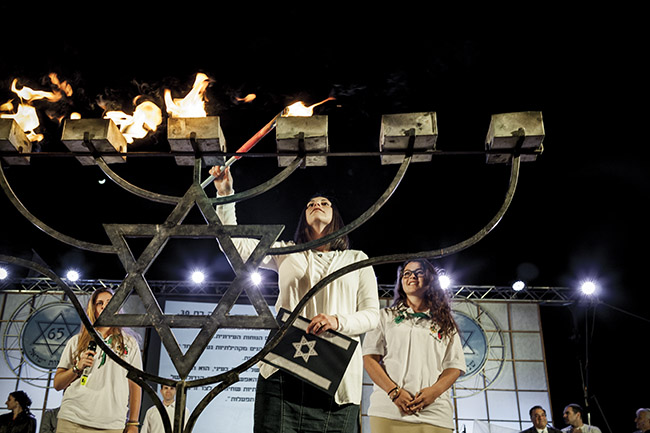 A young Israeli woman lights a menorah during an award ceremony for those inhabitants of the settlement who have distinguished themselves in the service to the country, reaffirming her enduring allegiance to Medinat Israel, the State of Israel. 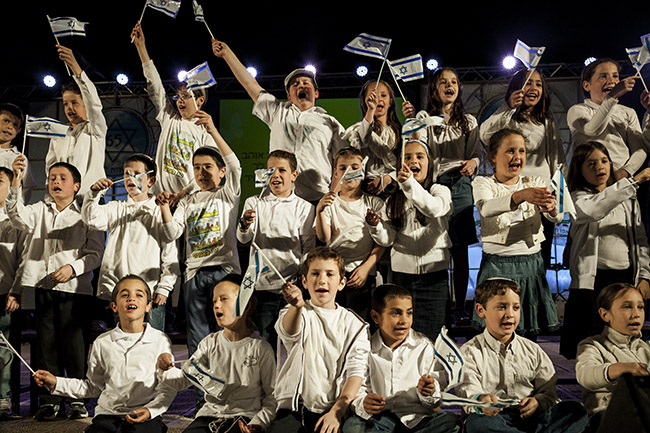 Children sing the Hatikva, Israel’s national anthem, at the conclusion of the Yom Ha’atzmaut celebrations in Efrat. Every public event, ceremony or demonstration in Israel is supposed to end with the national anthem, which virtually everyone knows by heart since a very young age. 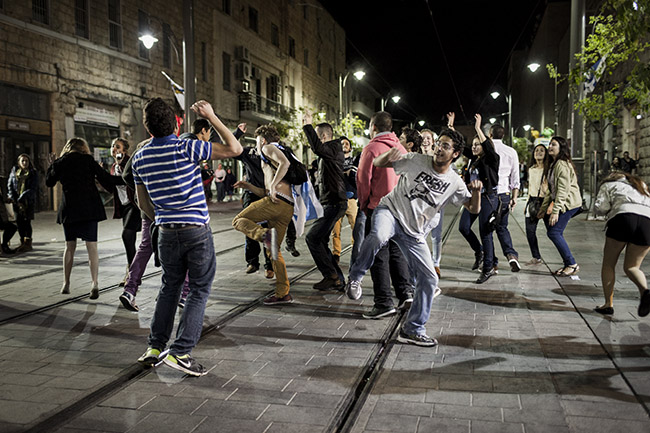 Dancing to drum ‘n bass music in the streets of Jerusalem as public ceremonies give way to a night of heavy partying. Most bars hold open Yom Ha’atzmaut events, with the youth from all over the country converging to the main cities for what is considered the year’s biggest party. 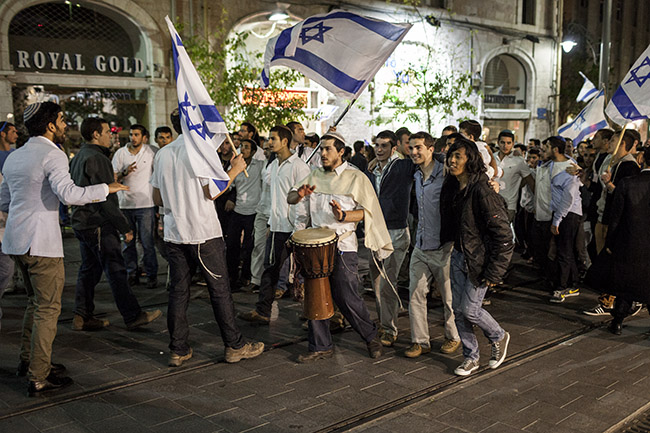 Students from the Ateret Cohanim yeshiva, a militantly Zionist religious school in Jerusalem’s Old City, march in the streets singing nationalistic and religious songs. Believing that for most secular Israelis Yom Ha’atzmaut is just a chance to get drunk, groups of yeshiva students visit the most popular party locations to involve others in their distinctively more Zionist way of celebrating the establishment of the State of Israel, an event they see as endowed with divine importance and as the Reishit Shmichat Geulateinu, “the first steps of our redemption”. 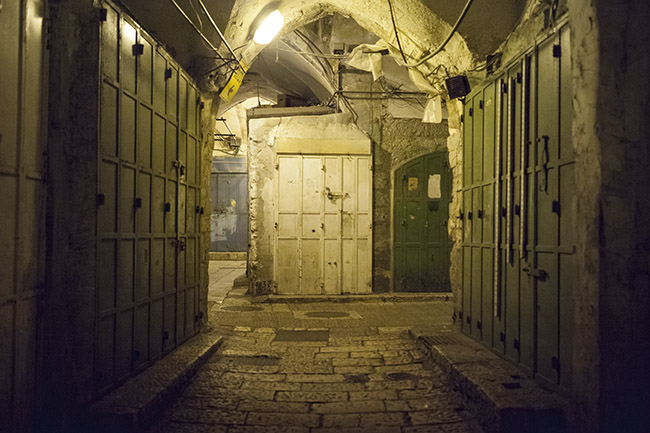 The empty alleys of Jerusalem’s Old City echo with the music coming from the Yom Ha’atzmaut parties. Unsurprisingly, Israel’s Palestinian population does not really join in celebrating the country’s establishment, which they refer to as the Nakba, the “catastrophe”. 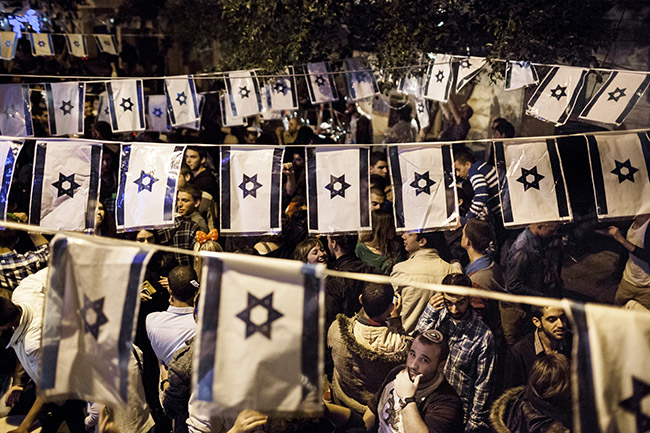 Usually divided by immense differences of historical background, religious practices, language, class and much more, Israelis throw themselves with a passion in the common experience of celebrating Yom Ha’atzmaut, with many saying that it is one of the few occasions where one is simply an “Israeli” as opposed to one of the many distinct and in some case conflicting identities which were brought togheter by the Zionist vision of Kibbutz Galuyiot, the ingathering of the exiles. 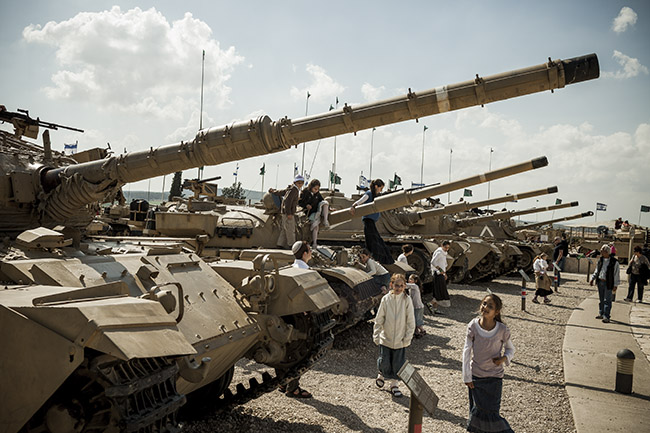 Children are taken to a visit to the Armored Corps museum in Latrun. During the day, Yom Ha’atzmaut is celebrated as a family day, with outings to parks and other popular attractions. Celebrating Israel’s inextricable relationship with Tsahal, the Israeli Defence Forces, many families visit military museums or army bases, which host shows and public displays of weaponry, reaffirming the link between the country’s existance and its armed defence. 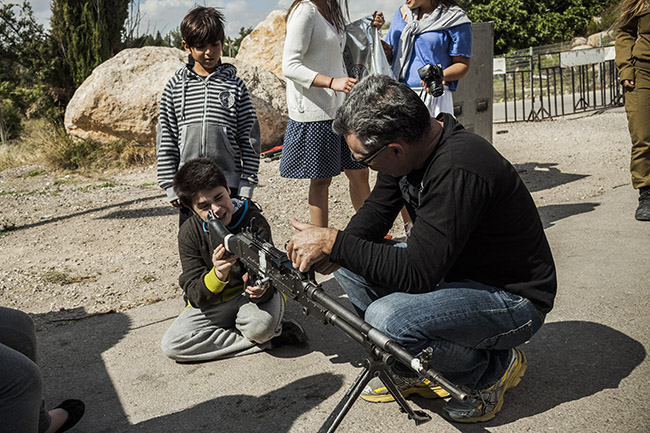 A father showing to his son how to operate the machine gun which he himself had used during his army service. Alongside getting killed by the country’s enemies, the other fundamental Israeli collective experience is serving in the army, which is universally regarded as both a sign of dedication to the collective known as “sharing the burden”, and a formative experience which literally shapes Israel’s citizens, in some cases even teaching them the Hebrew language or allowing them to meet for the first time people outside of their ethnic or religious community. 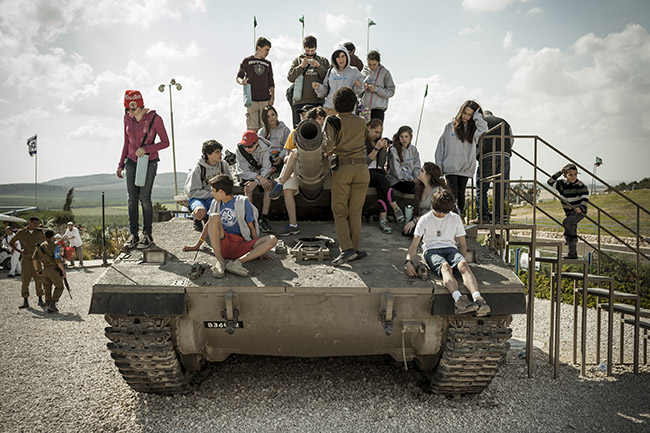 A group of young students is lectured by a soldier, who is but a few years older than them, about the history of the armored corps and their importance in safeguarding the country. The army plays a fundamental educational role in Israeli society, and even has a unit specially dedicated to this task, the Education and Youth corps. Soldiers are a regular presence in schools and social services, with the army itself sometimes seen as the country’s main educational, cultural and social institution. 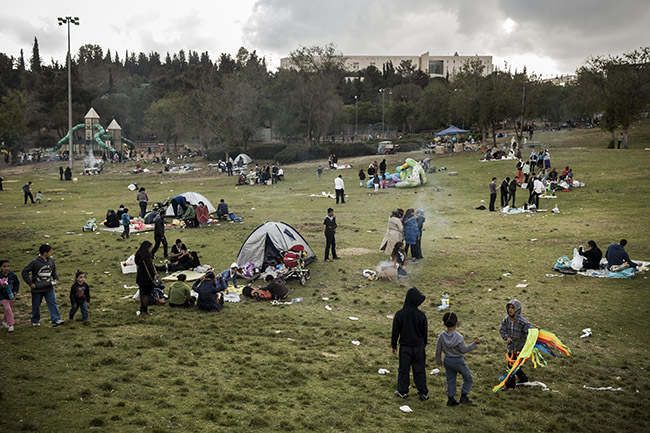 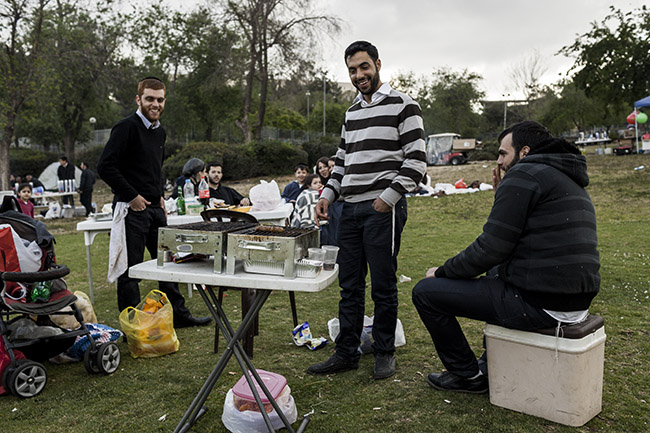 With the country having less than 100 years of history and large parts of its population having immigrated from other places, Israelis share very little common traditions beyond those that derive from Jewish religion, and even about that there are immense disagreements. National days such as these are part of Zionism’s attempt to articulate a common Israeli culture, in some ways even detached from Judaism proper. 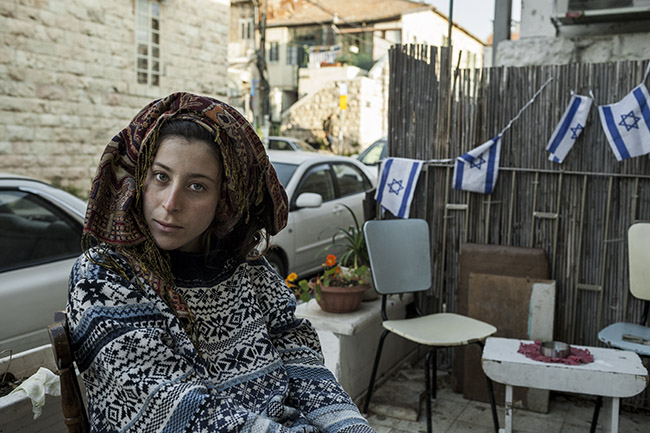 For an outsider, Yom Hazikaron and Yom Ha’atzmaut can be an extremely strange experience, which can leave one wondering about such blatant and staged displays of mourning or national pride. Are these nationalised moments of sadness and celebration simply the natural consequence of Israel’s troubled history and idelogical society, or are they central practices of that Zionist discourse which has determined the course of this history and to this very day shapes the nature of this society?