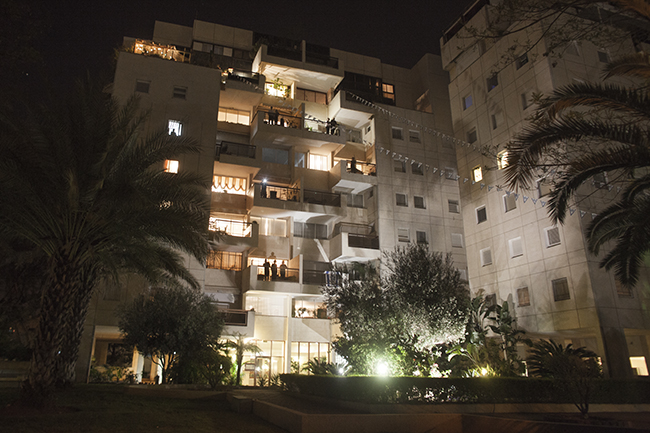 Tel Aviv, Israel – 6th of April, 2013: Residents of the wealthy northern neighborhood of Ramat Aviv watch from their balconies as protesters march towards the house of Yair Lapid, Israel’s new finance minister.

Continuing the rich Jewish tradition of lashon hara (“evil tongue”, or derogatory speech about another person), Israeli slang is equipped with a wide range of insults. One of them is tzfonbonim, referring to the affluent and Askhenazi (of European origins) residents of the upscale neighborhoods of North Tel-Aviv such as Ramat Aviv, home to the affluent and Ashkenazi former prime-time news presenter Yair Lapid. The tzfonbonim are held to be stuck-up, spoiled and naively detached from the hard realities of life in Israel.

Today’s protest was held after days after finance minister published on facebook a controversial post about his intention to place at the center of his policies “Riki Cohen”, an imaginary women of the Israeli middle-class whose family struggles to make ends meet on a combined income of 20,000 shekels a month (about 4,250 euros), which is actually 8,000 shekels (about 1,700 euros) higher than the national average.