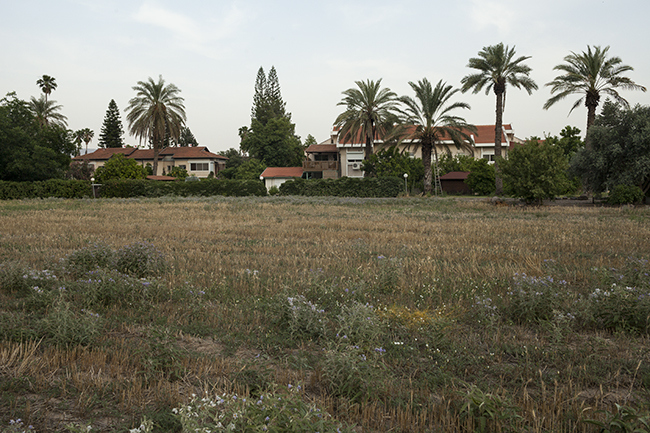 A few hundreds meters from the southern shores of the Kinneret (the Sea of Galilee) lies Degania Aleph, the first kibbutz. Founded in 1910 by ten men and two women, Degania was the original model for the communal agricultural settlements which established the first facts on the ground of the Zionist project. Today, Degania is home to 300 members, 150 children and 100 residents, living and working in one of Israel’s oldest and most prestigious communities.

The Jewish return to Palestine has consisted of a myriad of different groups coming at different times, for different reasons and with very different ideas. As is the case with most colonial projects, the principle of first-come, first-serve applied, deeply shaping the history of Israeli society. This process is divided into a series of immigration waves know as aliyah (the act of moving to the land of Israel, known by the hebrew verb for “going up”). The first five aliyah, which took place before the establishment of the state, brought most of the Ashkenazi Jews who built the country and more or less run it until the late seventies.

It all begun with a few tens of thousands of young Jews who emigrated almost spontaneously before the official establishment of the Zionist movement. Without the support of the Turkish authorities or of foreign powers, or any resemblance of an organized settlement project, most of the settlers of the first aliyah eventually left, doing what is known as yeridah (the act of leaving the land of Israel, referred to as “going down”). Those who managed to stay ended up working in plantations financed by Jewish philanthropists, which mostly employed the cheap, local Arab workers.

Then came the more organized Jews of the second aliyah, shaped by the new big thing of the time, worldwide Socialism. As they were leftists and gave great importance to issues of class-struggle, equality and a better future for all, these young migrants abhorred the exploitation of local workers, and set upon not repeating the mistakes of the First Aliyah by striving to create a new, more equal society, with its own socialist economy. And as they were Jews, this separate economy would most likely be Jewish, a choice that deeply shaped the history of Israeli society and that of its relationships with its neighbours.

This was cultural Zionism, prioritizing the creation of a new, self-reliant and more Hebrew “spiritual centre” in Palestine through practical settlement according to socialist principles, as opposed to the political Zionism of Herzl which dreamed of establishing a normalized, bourgeois Jewish state with the support of foreign powers. The kibbutzim, of which Degania was the first, were the laboratory in which to revive the Hebrew language and culture and bring the Jewish people back to practical work, allowing them to take part in the worldwide workers’ revolution from which they remained excluded in Europe. 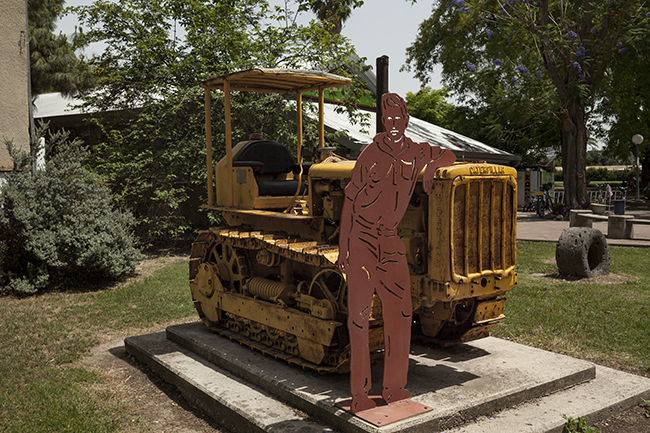 A portrait of a worker rests on a tractor on display in Degania’s “Harishonim” (the founders’) museum, dedicated to first settlers. Degania was home to mythological figures such as A.D. Gordon, Zionism’s main “philosopher of labour”, Joseph Trumpeldor, the country’s first military hero and martyr, and Arthur Ruppin, an accountant whom, as the official representative of the Zionist executive in Palestine, was in charge of a dealing with a strike organized by the settlers of Degania against the bourgeois lifestyle of the Kinneret farm’s manager, Baumann. Ruppin was smart enough to fire the manager, and allow the workers to run the farm collectively, setting the stage for cooperation between a group of radical socialist idealists and the mainstream Zionist movement. 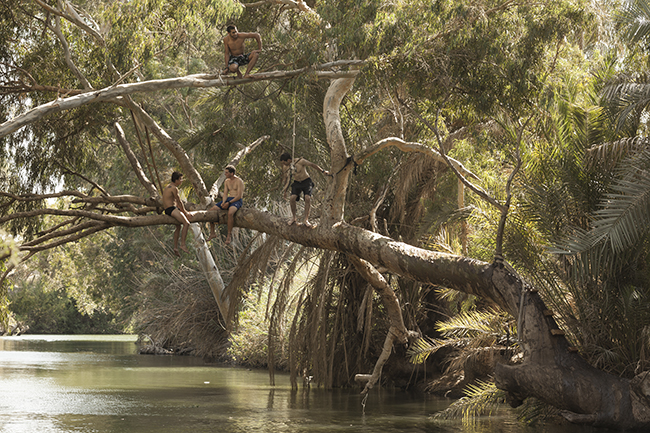 Youth from Degania hang out by the Jordan river, which flows past the kibbutz. Through great hardship and much ideological debate, Degania managed to grow, leading to the establishment of another settlement nearby, Degania Bet. And as the kibbutzim grew, so did their institutions and their importance within the Zionist project, in a certain extent defining its borders and those of the future Israel. In a practice that continues to this very day, the Zionists settlers understood very early that the real claim of the Jews to the land would be determined by their physical presence on the territory, and not by Biblical references, although things have changed quite a lot in this regard since then. 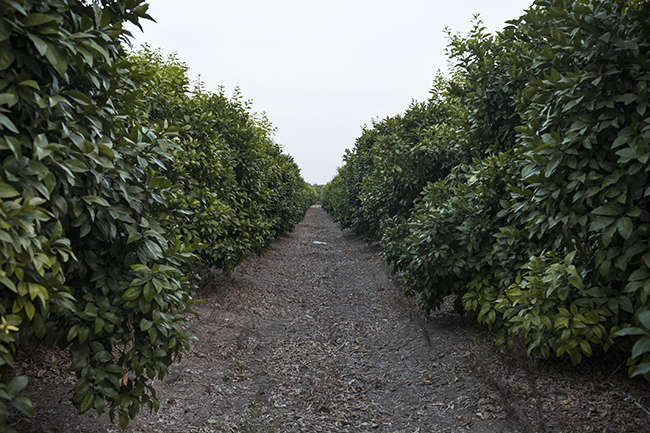 A citrus grove, once the central element of Palestinian agriculture, in Kibbutz Degania. While today all it takes to create a settlement is a few caravans and a paved road connecting them to Israel proper, in the time of the kibbutzim it meant literally starting from scratch, including paving the road, surviving disease and starvation and establishing an agricultural community which could feed its members and fend for itself nearly on its own, a process which placed enormous demands on its pioneers, the halutzim. One of the founders of Degania, Yosef Baratz, used to cry himself to sleep after a day’s hard work and wondering, at the age of seventeen, whether he would ever have the strength to become a “real worker”. 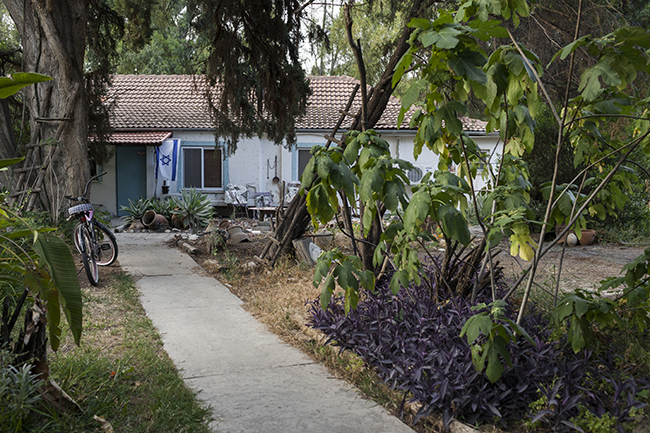 With their high ideals, and the right amount of financial backing by the growing worldwide Zionist movement, the “small quality people” of the kibbutzim became the backbone of the nascent Israeli society: although they were never more than 5% of the population, they made up a disproportionate part of the country’s political, cultural and military elites. The kibbutzniks (inhabitants of the kibbutz) have always served in the army with distinction, very often in special units, and the second child to be born in Degania, Moshe Dayan, grew up to be one of Israel’s greatest military leaders, the mastermind behind Israel’s stunning victory in the Six Days War of 1967. 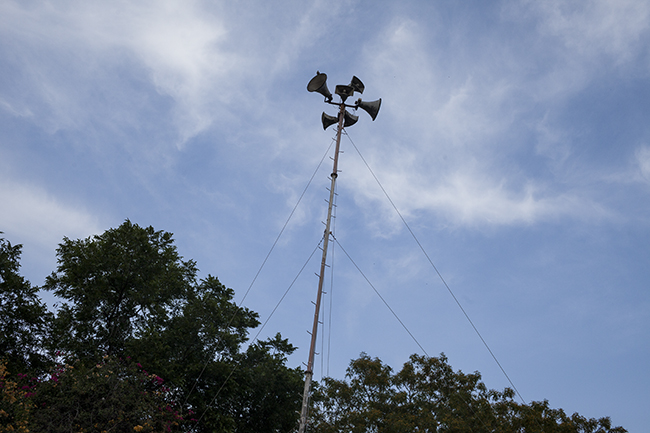 Situated very far away from the population centres on the Mediterranean coast, Degania was an isolated European outpost in what was becoming an increasingly hostile Arab land, leading to the establishment of the first Jewish military organization in Palestine, the Hashomer (Watchman) Association. In later years, the guards were replaced by the alarm sirens which can today be seen all over Israel, often used to warn against incoming fire from the nearby Golan hills which, before their conquest by Israel in 1967, must have been used by the Syrian army to fire on Degania on a daily basis, judging by the great number of miklat (underground bomb shelters) which dot the kibbutz’s area. 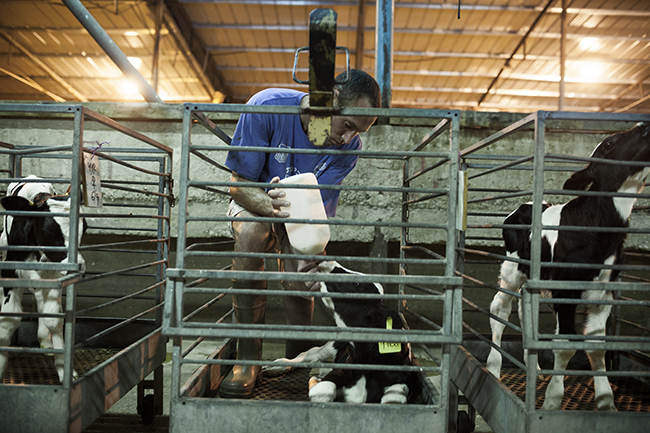 Feeding cattle at Degania’s milk farm, one of the kibbutz’s main activities and traditionally a pillar of the kibbutzim’s economy, with the smell of dung referred to in Israel as “the smell of the kibbutz”. Through their strenuous, creative and highly collectivized agricultural work, the kibbutzim laid the foundations of the economic viability of the Zionist project and to this very day produce a third of Israel’s agricultural output, although they now derive 75% of their income from other private enterprises, tourism or their highly-educated members’ earnings outside of their communities, largely from Israel’s booming hi-tech economy. 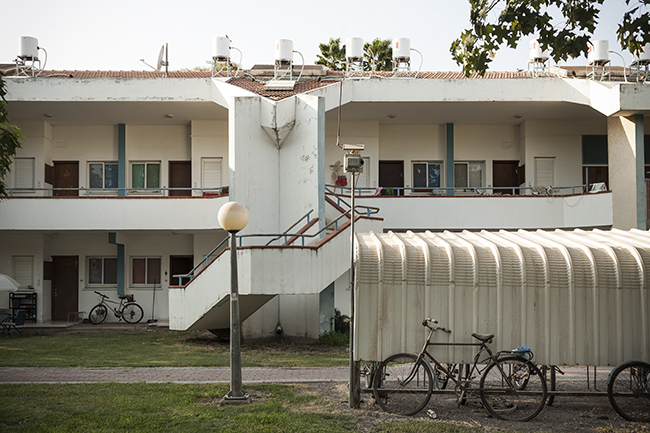 Flats reserved for young members of kibbutz Degania. While their architecture, and most of their inhabitants’ family histories and physical appearances are still strongly rooted in their Eastern-European, collectivist past, the kibbutzim today are essentially wealthy suburban communities with a strong emphasis on mutual responsibility. Members enjoy growing up in beautiful communities designed to ensure high living standards, study in some of the country’s best school and have privileged access to prime land, an extremely rare commodity in today’s Israel. However, throughout their history the kibbutzim had to contend with their young members’ tendency to move out, choosing to put their education to use in more exciting places such as Tel Aviv. 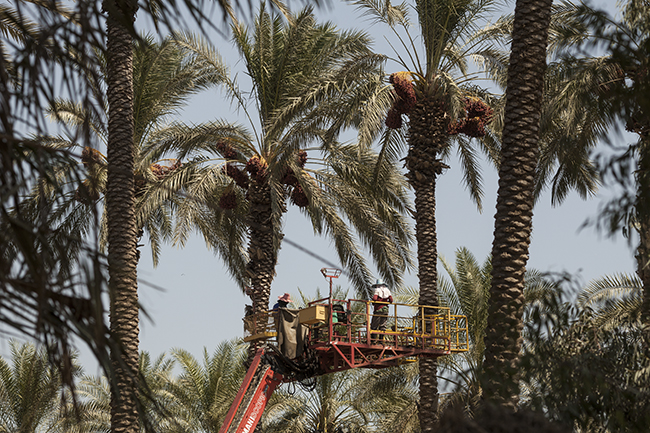 Dates are harvested in one of kibbutz Degania’s plantations by temporary Asian workers. Over time, the kibbutzim abandoned the “conquest of labour”, which envisioned a self-sufficient economy made up of Jews who did not exploit each other or anybody else. At first it was the mizrachim (Jews from Arab countries) who were taken en-masse to Israel in the fifties, followed by Palestinian workers and then, after the second intifada and the building of the Separation Wall, temporary workers from Asia who are brought in the country and flown out according to the need, and whose lives and economic fortunes have essentially nothing to do with those of the kibbutz’s inhabitants. 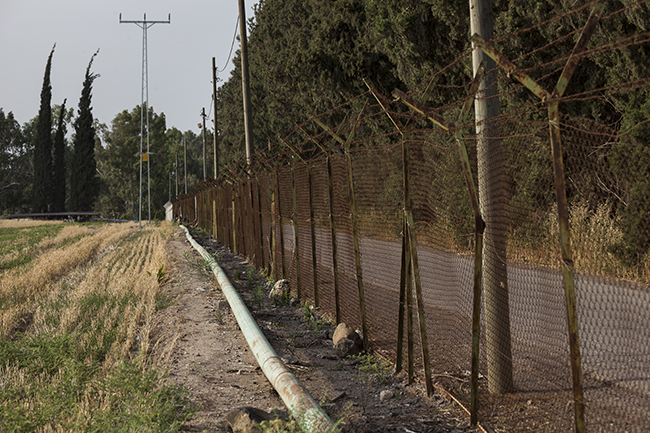 Like every self-respecting settlement, Degania had and still has a fence, with watchtowers and all. In the 1948 war with the Arabs, Syrian forces reached the gates of the settlement, only to be repulsed by the heroic resistance of its inhabitants, with a burned Syrian tank still on show at the kibbutz’s main gate. Over time, however, the kibbutzim developed other types of fortifications, creating a somewhat insular society which kept itself apart from the rest of the country. And due to their fundamental nature as Zionist settlements, and in some cases even to the principles which regulate the leasing of land within Zionist institutions, Palestinians are practically barred from moving into a kibbutz, as is the case with any outsider who wishes to move in but does not pass a “suitability test” administered by the admission committee. 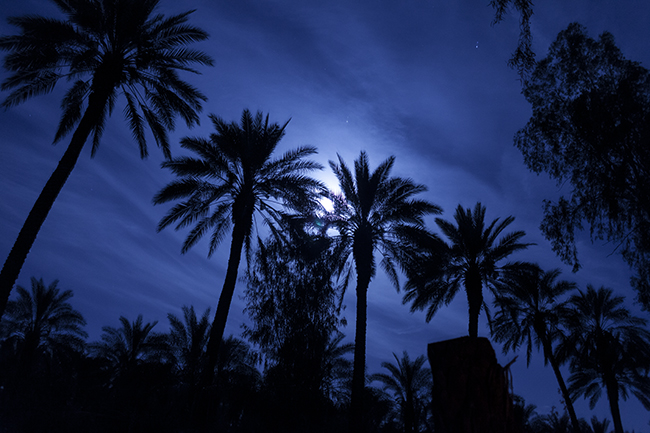 After its heroic beginnings and decades of steady growth, which saw the establishment of more than 250 communities, the kibbutzim were hit hard by the economic crisis which enveloped Israel in the ’80s. Their decline was symbolic of the changes in Israeli society as a whole, after the arrival of millions of new immigrants who had a very different type of aliyah and had others, if any, ideas of how to live in Israel. Faced with a decline in population and cuts in government funding, the kibbutz movement was forced to abandon most of its socialist principles. In 2007, the members of Kibbutz Degania voted by an 85% majority to become a “renewal kibbutz”, privatizing basic services such as water and electricity and ceasing to share their personal salaries, introducing for the first time income inequality while retaining a “security network” meant to ensure reasonable living standards to everyone. 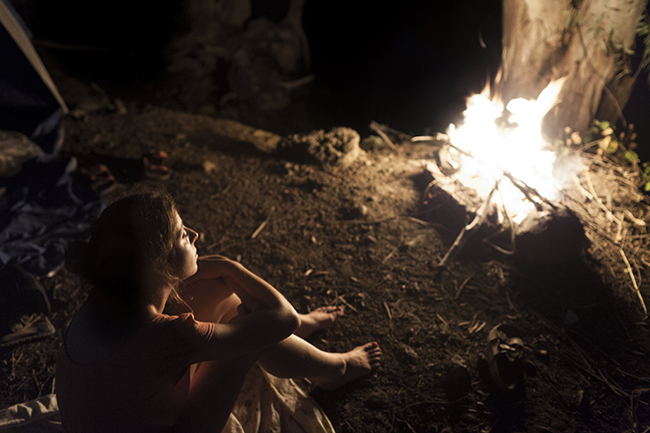 As Israeli society becomes increasingly divided into secular and religious, left-wing and right-wing, rich and poor and so on and so on, the ideals of the kibbutz (whose name means “gathering” in Hebrew) might seem a remnant of the past, almost part of Israeli folklore. And as the mantle of pioneering settlement has been handed to the religious communities being established in Judea and Samaria, the role of the kibbutzim in today’s Israeli society is uncertain. After years of steady decline, the kibbutzim actually experienced a growth in members over the past five years, signalling that the history of the kibbutz movement is far from over and might still serve as a model for a more equal and fair society, especially in contrast with today’s hyper-capitalist and individualist Israeli society, which is plagued by growing poverty and one of the highest levels of income inequality in the western world.