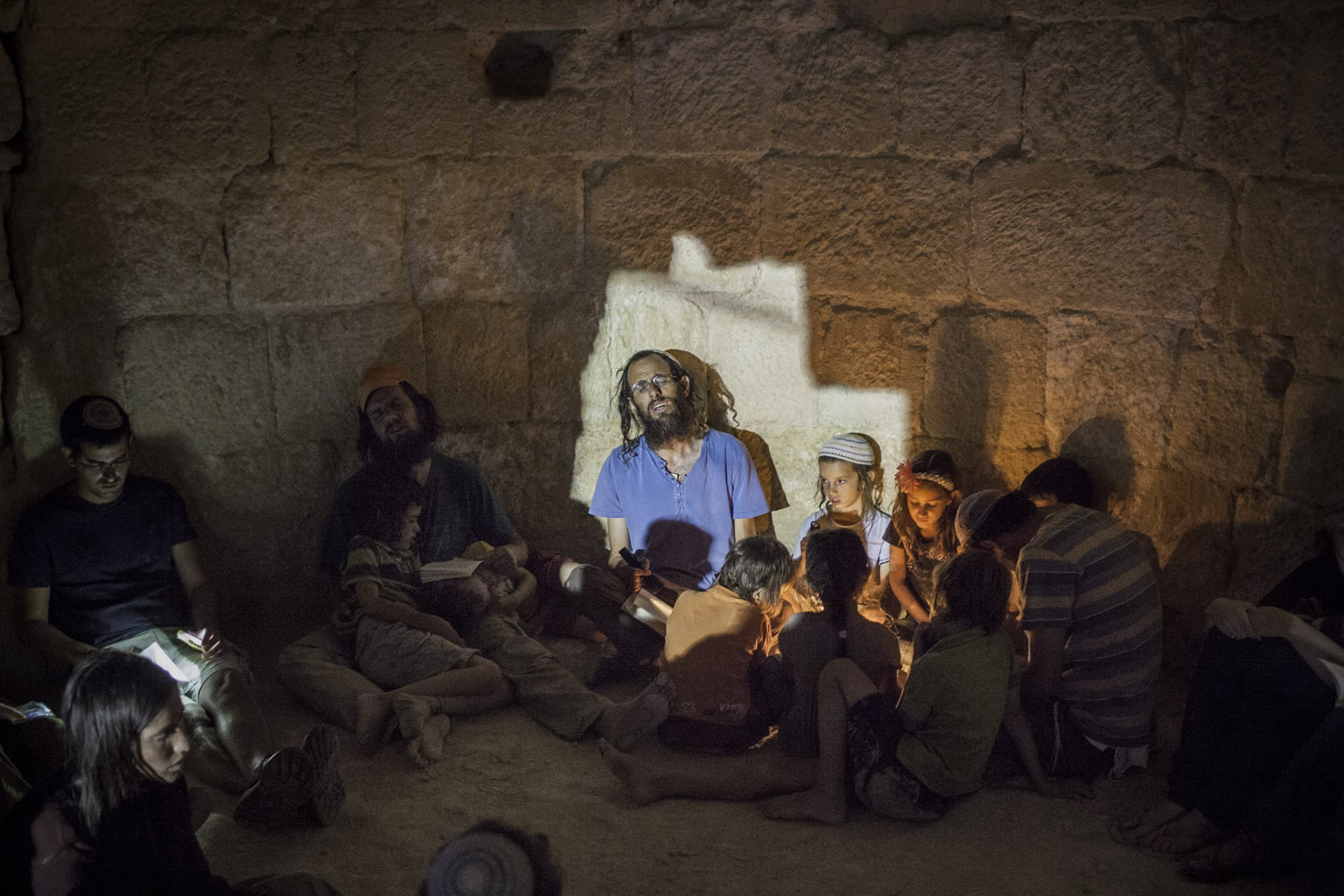 Reading the Book of Lamentations on Mount Herodion, 2013.


Today is the ninth day of Av, the month of the Jewish calendar that falls between July and August, which in Hebrew is known as Tisha B’Av and is one of many holidays dedicated to commemorating the historical misfortunes that befell the various peoples who live on the land between the river and the sea.

There is Yom haShoah, commemorating the Holocaust, Yom haAtzmaut, Israel’s day of independence that is known to Palestinians as Nakba Day, marking their forced expulsion from what then became the Jewish state, Yom haZikaron, dedicated to the victims of terrorism and the fallen from the country’s many wars, Land Day, on which six unarmed Palestinian citizens of Israel were killed by police during a demonstration against the confiscation of lands, and a few others too.

For religious Jews, Tisha B’Av is the bad day par excellence, and on this day they fast, mourn and abstain from any enjoyable activity such as studying the Torah, and neither do they wash, apply creams or oils, wear leather shoes or have sex. Only distressing texts can be read, such as the Book of Lamentations or the chapters of the Talmud devoted to mourning and the destruction of the Temple. Just like at a funeral, the mourners sit and sleep on the floor, and there is even a tradition of eating boiled eggs dipped into ashes before the fast begins.

Both Israelis and Palestinians make a point of involving their children in these commemorations, and it is obvious that their purpose is also to drill certain concepts into young minds, or at least to teach them about their history, however objectively. 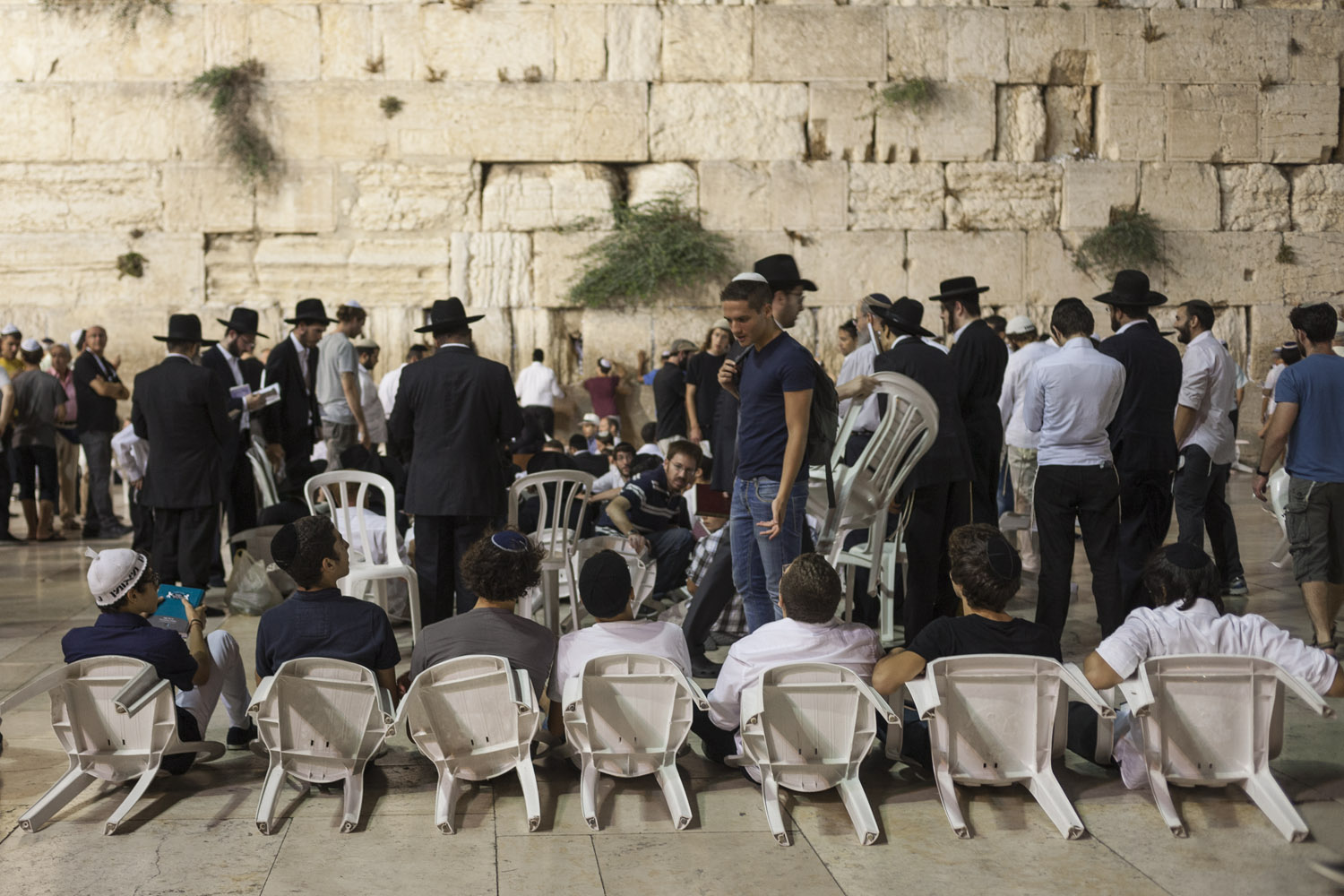 
The destruction of Jerusalem’s Temple is the central tragedy in a long series of tragedies that took place on this day of the year or in the days around it. It began with the return of the Twelve Spies sent by Moses to scout the Promised Land, after 40 years of wandering through the desert of Sinai. They reported that land was beautiful and fertile, and also already inhabited by many people, with ten out of twelve spies suggesting that it was not a good idea to go there after all. Their report plunged the Children of Israel into panic and despair, in a temporary loss of confidence that G-d did not take well: “You cried before me pointlessly, and I will fix this day as a day of crying for all generations”.

It was not an idle threat: the First Temple built by Solomon burned down on this day, as Nebuchadnezzar destroyed the Kingdom of Judah in the 6th century BCE and deported its population to Babylon. Some six hundred years later, it was the Romans who laid waste to Jerusalem on Tisha B’Av, burning down the Second Temple. This time the Jews were only scattered among the land, and some of them fled to the nearby mount Herodion, where they cried as they watched the city burning into the night. 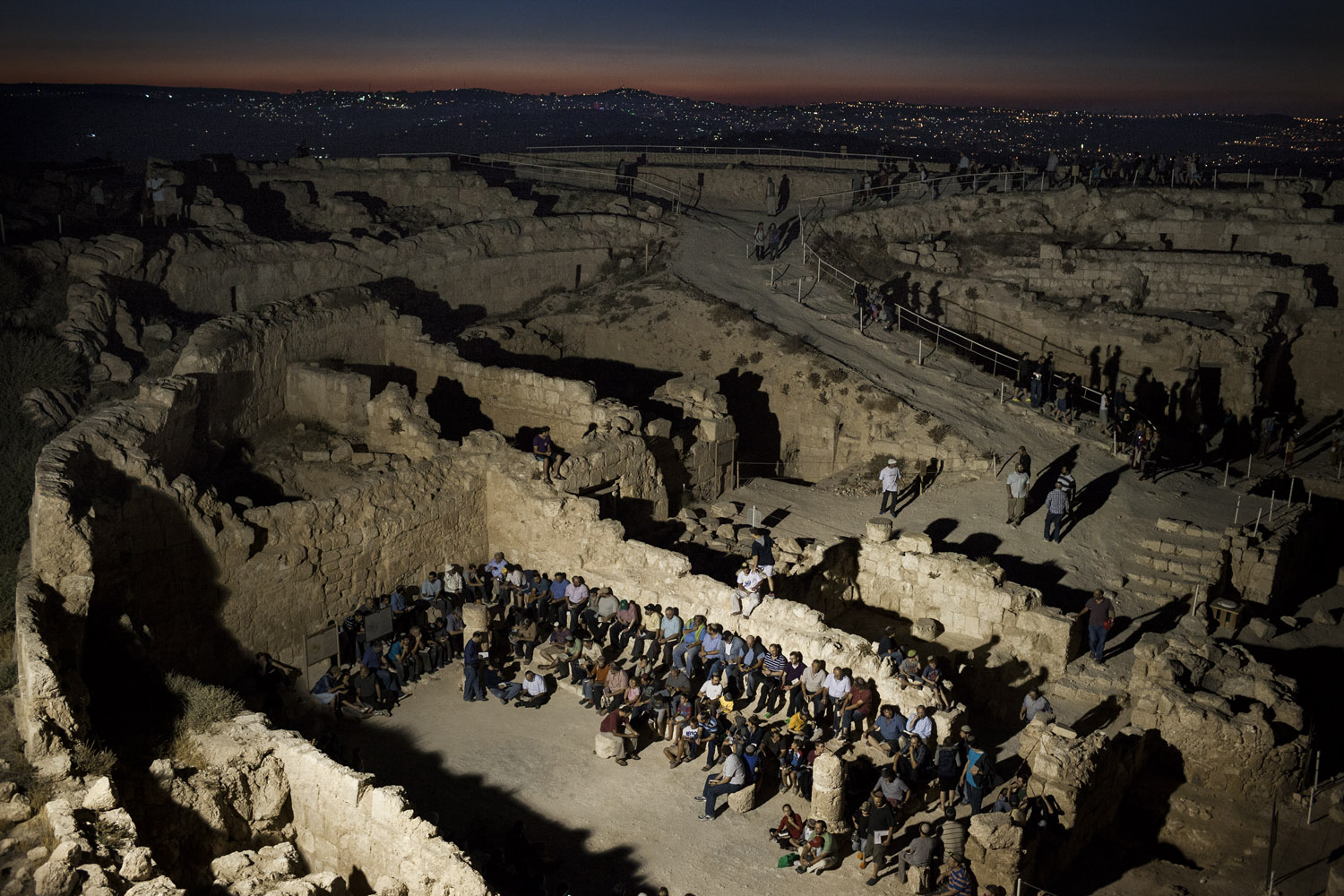 Mount Herodion and the lights of Jerusalem on the horizon, 2013.


“Remember what has happened to us”, reads the Book of Lamentations, “our inheritance has been turned over to strangers, our homes to foreigners. We have become fatherless, our mothers are widows. We must buy the water we drink, our wood can be had only at a price. Those who pursue us are at our heels, we are weary and find no rest… The elders are gone from the city gate, and the young men have stopped their music. Joy is gone from our hearts, our dancing turned into mourning. The crown has fallen from our head. Woe to us, for we have sinned! Because of this our hearts are faint, and because of these things our eyes grow dim Mount Zion lies desolate, and foxes prowl over its ruins…”

The Romans eventually finished the job around the same day of the year, some sixty years later, when they crushed Bar Kokhba’s hopeless revolt against imperial rule by taking the last Jewish stronghold, Betar, killing more than half a million Jews and then going as far as ploughing and sowing with salt the very ground on which the city of Jerusalem stood. It was the end of any organised Jewish presence in the land for almost two thousand years, but the curse of Tisha B’Av followed the Jews into the Galut.

This day than saw the beginning of the First Crusade in 1096, with the accompanying massacres of Jews along its journey and after its successful conclusion, the expulsion of Jews from England in 1290, from France in 1306, from Spain and South Italy in 1492, the formal adoption of the Final Solution by the German Nazi Party in 1941 and the destruction of the Warsaw Ghetto the following year, with the departure of the first trains to the gas chambers of Treblinka. 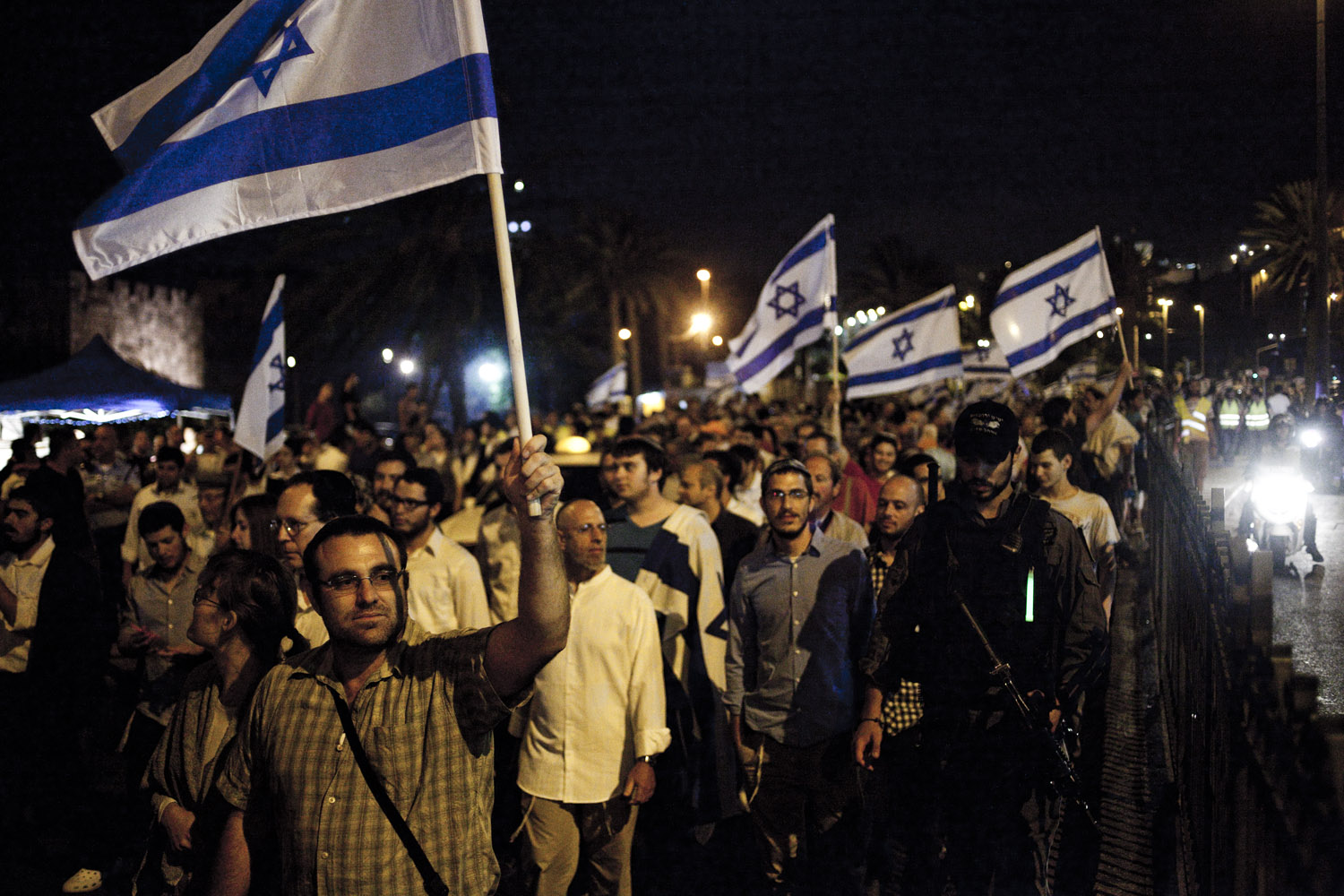 Nationalist-religious Jews march around the walls of the Old City on Tisha B’Av, 2012.


In contemporary Israel, Tisha B’Av is a very important day for religious Jews and while most other citizens of the state do not mourn, shops are closed and it is actually forbidden to sell food and especially alcohol. In Jerusalem, people gather at the Western Wall, praying by the very ruins of Solomon’s Second Temple, and sit on the ground as they study their grim tales of misfortune.

On what is theoretically a day for reflection on the pain of loss and conflict, and on the various ways in which G-d can punish the sins the people of Israel, some religious nationalist Israelis choose to mark Tisha B’Av with a provocative procession around the walls of the Old City of Jerusalem, venturing into the eastern half of the city’s center and inevitably leading to tensions with its Palestinian residents, who also have to deal with the heavy police presence that always accompanies events like this one. 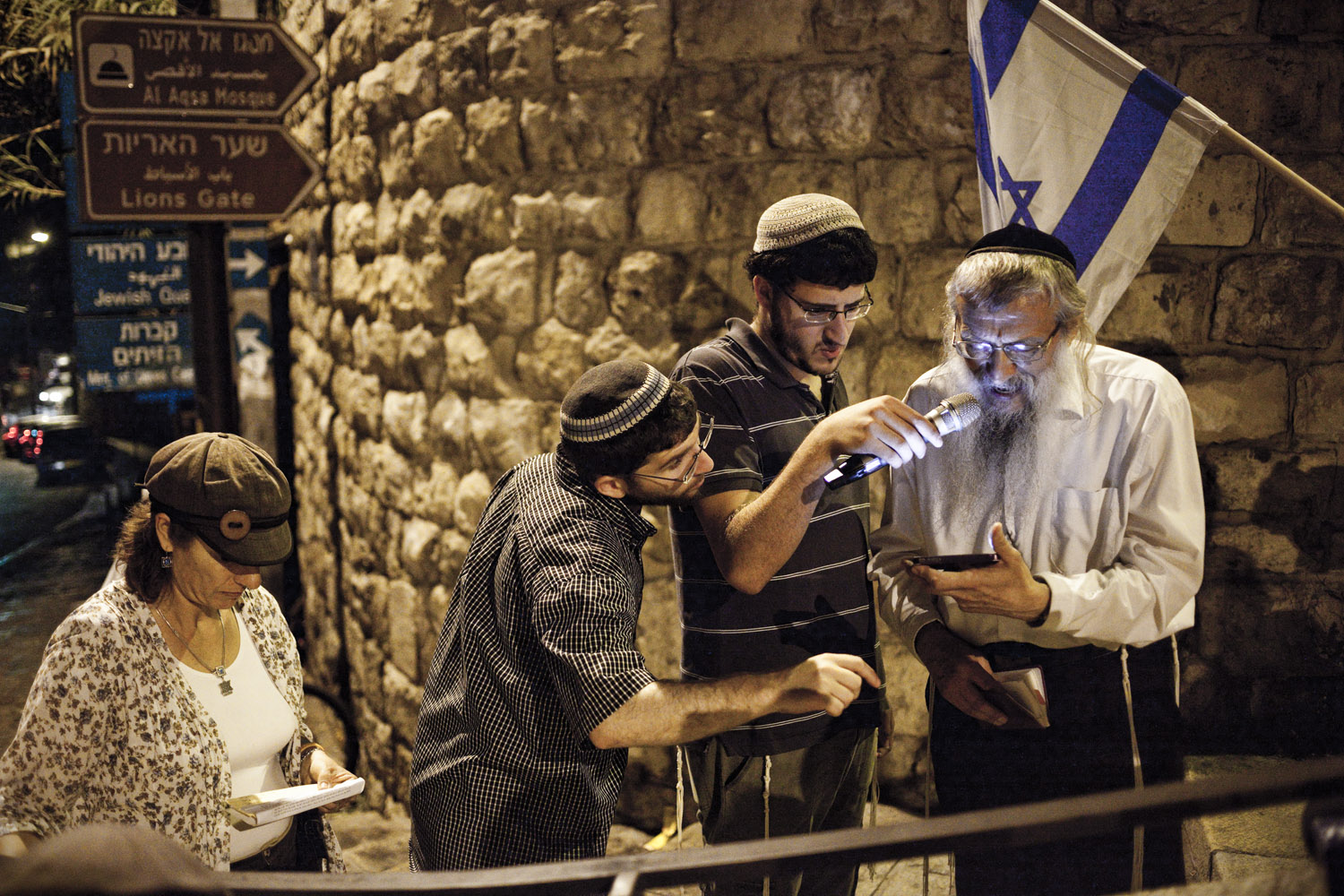 Surrounded by security forces, settlers gather to pray near Lion’s Gate in 2012, not far from where Iyad Halak, an unarmed autistic man, was killed by Israeli police in early June this year.


The Roman legions are long gone, and the empire they fought for is nothing but dust, as are most of the powers which have taken Jerusalem by force, while the city still stands, with all its problems and its contradictions. These days the forces of destruction take different forms, and are no longer confined to one day of the year: in East Jerusalem the homes of dozens of Palestinian families are demolished regularly under the most dubious of pretexts, as the municipality relentlessly pursues one of its main priorities: “maintaining a Jewish majority in the undivided capital of Israel” through a toxic mix of marginalisation, criminalisation, systematic neglect and outright harassment of half of the city itself, all in the name of official state policy.

Things aren’t very going well in the western part of the city either, where the destruction takes the form of poorly regulated real estate speculation, with unsightly towers of expensive flats for foreign Jews that are driving up prices and disfiguring the geography of this ancient city for generations. While Jerusalem used to be the cultural center of the country, today its secular middle-class population is being squeezed out, and is also besieged by the growing influence of orthodox Judaism, nationalist rhetoric and the degenerating political situation. 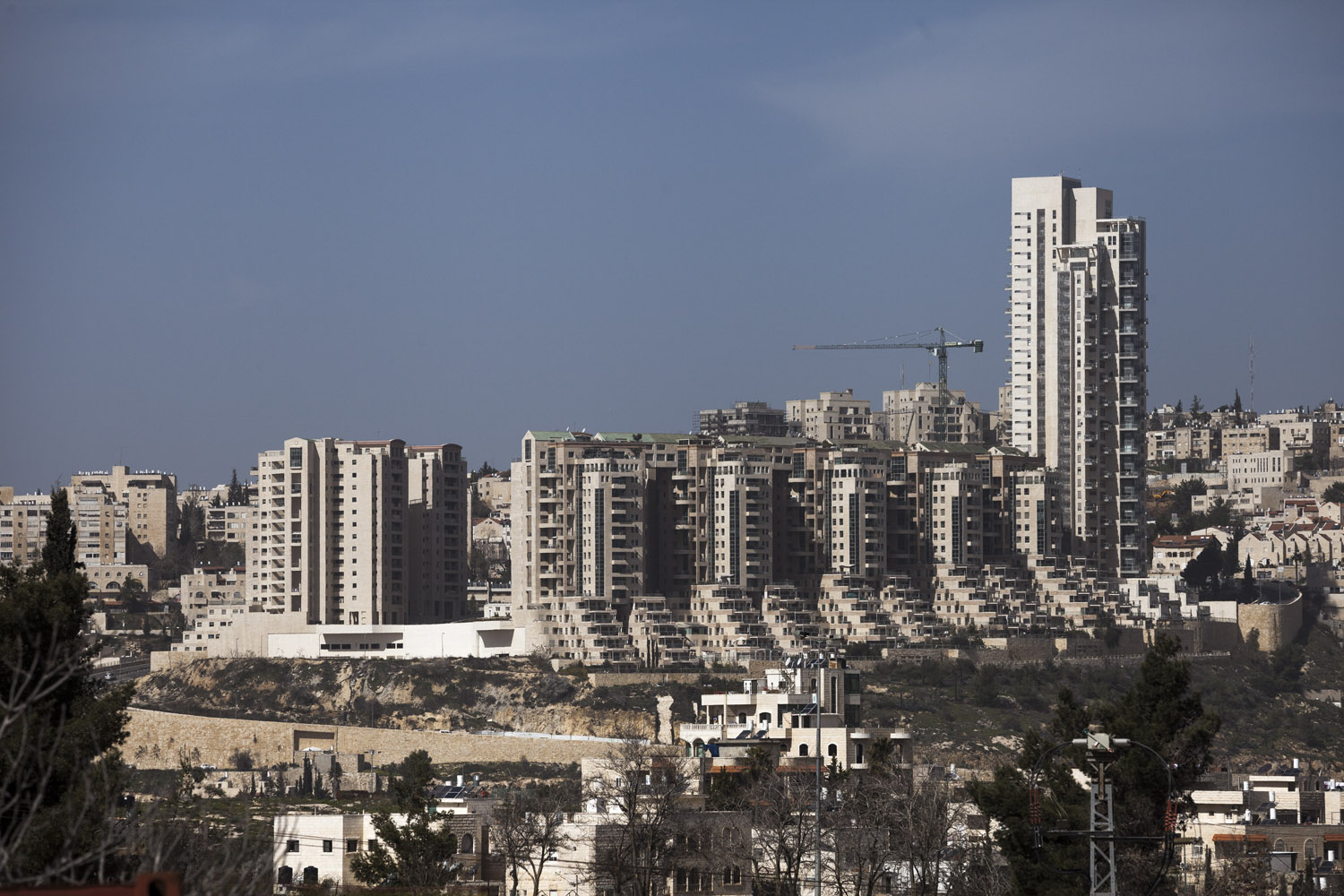 The Holyland Towers housing complex just south of the Old City, a real estate speculation so corrupt that it led to former prime minister Ehud Olmert being sent to prison in 2015.


In a somewhat more peaceful kind of commemoration, many choose to mark Tisha B’Av by re-enacting their ancestors’ flight from the destruction, and gather on Mount Herodion, an archaeological park just a few kilometres south of the Temple Mount, in the occupied West Bank. From the ruins on the top of this hill one can clearly see the lights of Jerusalem, as well as many Palestinian villages alongside the new road that links the settlements of Judea to the southern entrance to the capital. Lying in Area C and therefore under full Israeli jurisdiction and security control, Mount Herodion can be reached with a direct bus from the center of town, or even at foot from the nearby settlements.

Far from the strict rituals of a synagogue or of the Western Wall, people gather in groups both large and small, some wearing army uniforms and listening passively to some guide, while others bring their children, who often interrupt the reading in order to ask questions. The tales of misfortune might be always the same, but just like there are many forms of destruction that we can inflict on Jerusalem, there are just as many ways to understand all this misfortune, and the way in which we answer the questions of children remains more important than ever, if we are to avoid yet another tragedy in a long series of tragedies that befell the people who live in the land between the river and the sea. 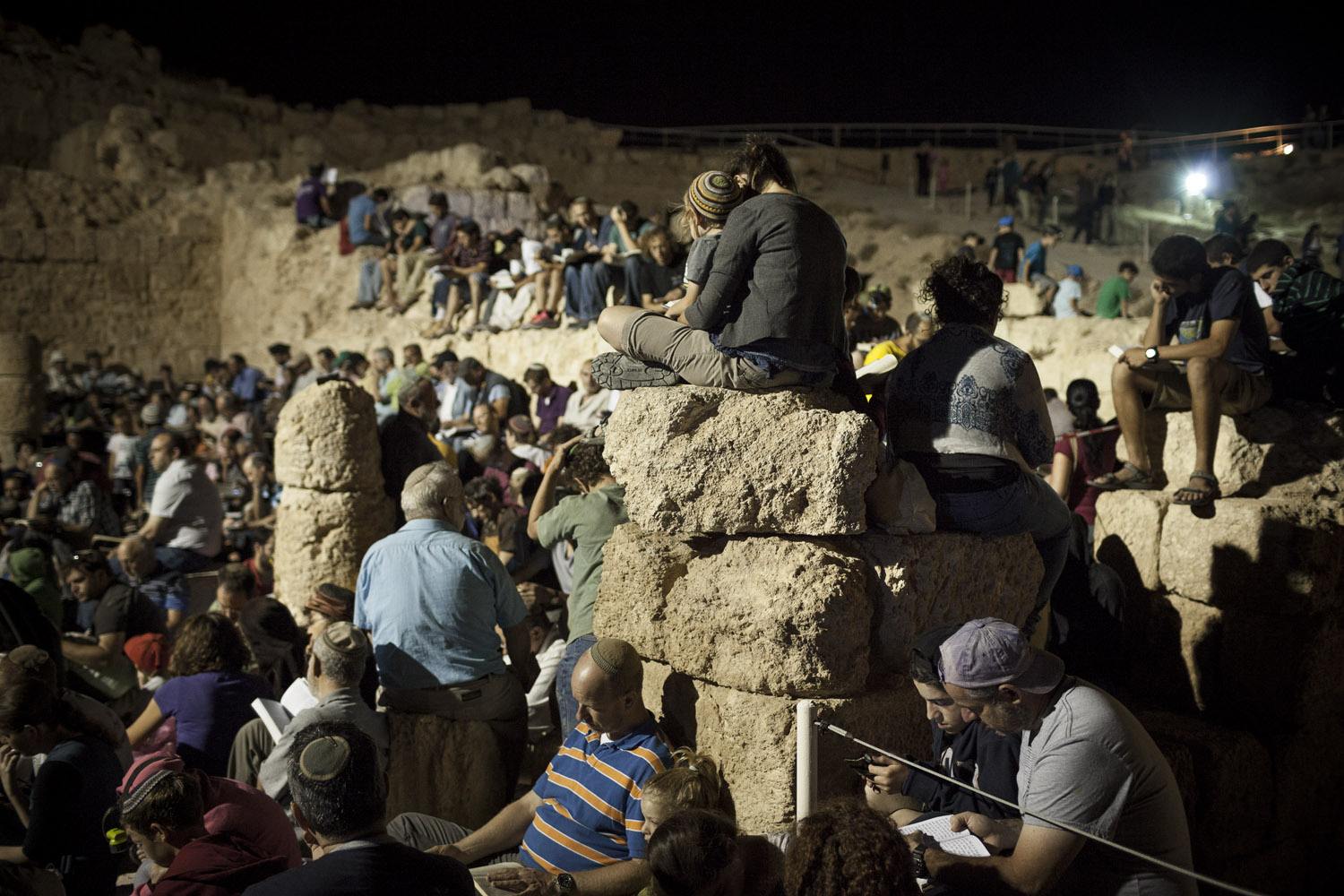