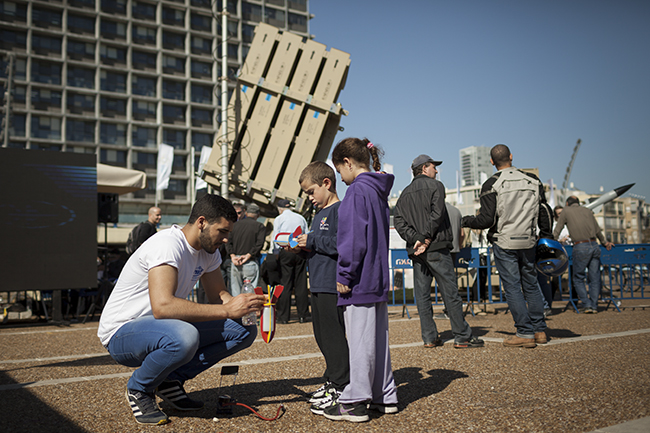 Tel Aviv, Israel – 26th of March, 2014: The Iron Dome (Kippat Barzel) anti-missile system is displayed in the city’s central Rabin Square, as part of the national Science Day held to celebrate Israel’s technological advancements and inspire its youth to study science and contribute to the country’s growing hi-tech industry. While Israel’s founders prided themselves mostly on their agricultural settlements and the food self-sufficiency they gave to the country, their grandchildren today have very different ambitions, dreaming to establish a successful start-up or to find a well paid job in a hi-tech company, many of which work together with the IDF to develop some of the world’s most advanced weapons systems. One of these is the Iron Dome, produced by Rafael Advanced Defense Systems and designed to counter short-range rockets and mortar fire, which lately have became the weapon of choice of Israel’s enemies such as Hamas and Hezbollah, whose rocket barrages effectively paralysed the north of the country during the 2006 conflict.

Short-range rockets are cheap, easy to move around and hard to intercept, both because of their small size and of the short time they take to reach their target. They might not cause significant damage from a military point of view, but as the Israelis living in the communities around Gaza know very well, they can be used to persistently harass a civilian population, disrupting everyday life and keeping entire towns under threat. Places such as Sderot have been under sporadic fire for years, and the inability of the Israeli government to put an end to it notwithstanding the huge amount of firepower poured over Gaza had become a growing cause of frustration in Israeli society, which had always taken the country’s military superiority for granted. When the Iron Dome system, on whose effectiveness there were many doubts even among the IDF’s leadership, was finally deployed and successfully intercepted a Grad rocket over the sky of Ashkelon, it quickly became the pride of the country, once again proving that Israel’s combination of ingenuity and resilience will eventually see off any challenge. Especially after the Pillar of Defence operation against Gaza of 2012, during which the system took down dozens of missiles fired at Israeli cities, Israelis fell in love with the Iron Dome, with a video game simulating its operations going viral over the internet.

Based on a Detection and Tracking Radar, a Battle Management & Weapon Control unit and a Missile launcher, the system is able to asses if the trajectory of the rocket poses a risk to an inhabited area and fire the Tamir interceptor missile accordingly, even in the case of multiple incoming rockets or bad weather conditions. Funded by the tune of several hundred million dollars by the US government, the Iron Dome is an expensive weapon system, with a battery costing up to 50 million dollars and the price tag for a single shot at about 40,000 dollars, much more than the rockets it is designed to counter, some of which are even home-made as the Qassam. However, the system has proved to be an invaluable strategic asset for Israel, effectively reducing civilian casualties in the recurring confrontations across the border with Gaza and restoring confidence in the IDF’s ability to protect the home front and in the Israeli leadership’s commitment to the security of its citizens. Many countries have expressed an interest in buying the Iron Dome, which has also produced significant technological returns, as the country’s defence minister Moshe Ya’alon pointed out when he recently said that Israel should not be too grateful about the financial aid it gets from the US, who in turn get advanced and battle-tested technologies such as the Iron Dome.

It was probably for these reason that the anti-missile system proved to be the main attraction of Tel Aviv’s Science Day event, with scores of people flocking to have their picture taken next to a missile launcher at what theoretically should have been an educational event. Rafael employees were at hand to distribute stickers bearing the system’s logo and to give explanations, although when asked specific question, they almost always answered that “this information is classified, I cannot answer”. Nearby, a tent by Israel Aerospace Industries showcased models of reconnaissance satellites, while another explained the functioning of a laser-guided anti-tank weapon. Even the stands set up by the ORT educational network, which manages many of the country’s technical schools, showed somewhat of a fixation with weapons, and specifically with missiles. Kids could have their picture photoshopped on a rocket flying through the clouds, or even launch one themselves, pumping air into a water bottle until the cork pops and the pressure sends it flying into the air. While Israel’s technological achievements in the field of weaponry are undoubtedly impressive and every day contribute to keep the civilian population safe from what are indeed extremely real threats, the prominent place there are given in public discourse and even at an event about science and education does leave one to wonder as to what came first: Israel’s never-ending history of armed conflicts with its neighbours, or the persistent reliance on weapons as one of the main ways to deal with its history, and also with its neighbours. 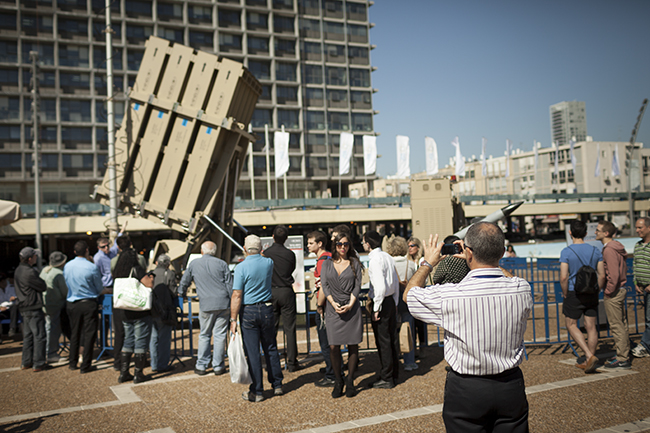 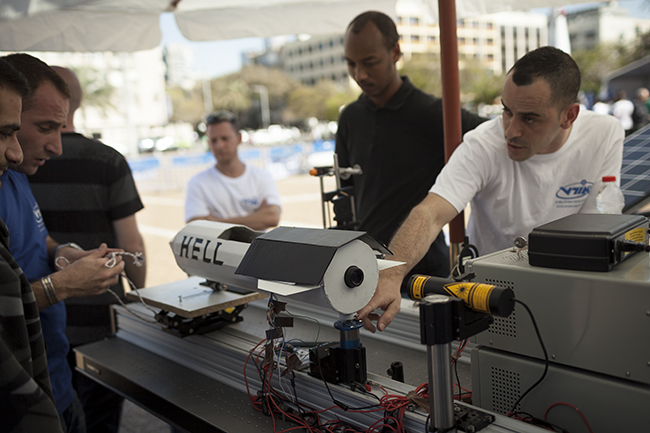 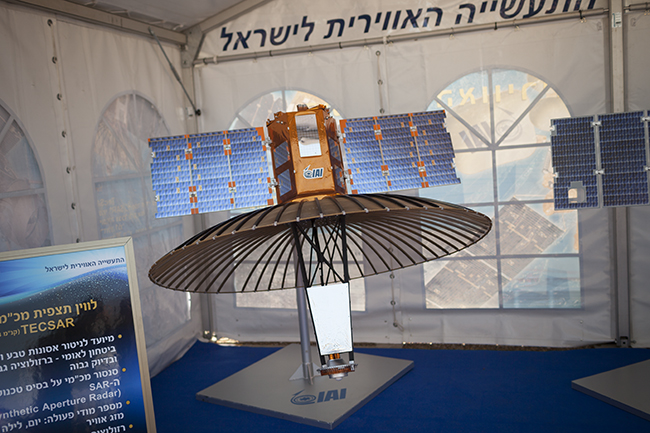 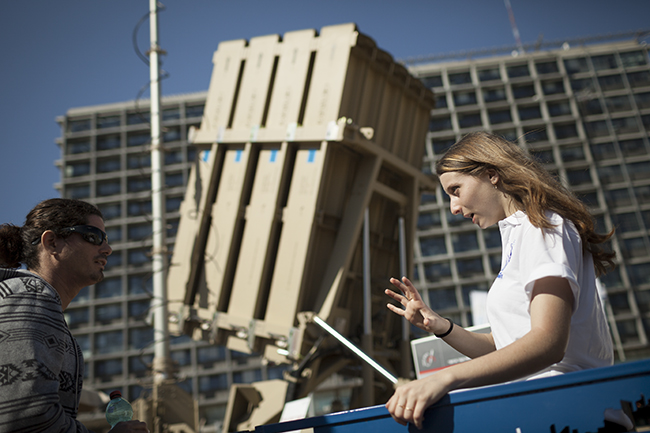 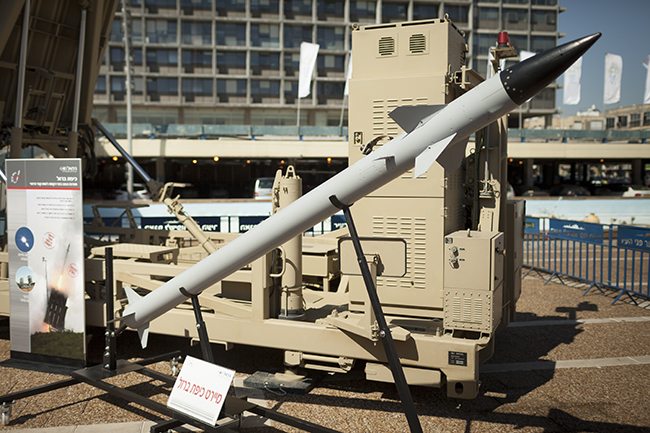 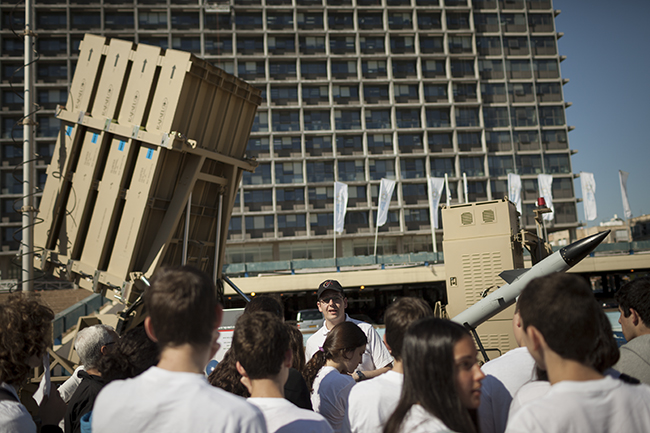 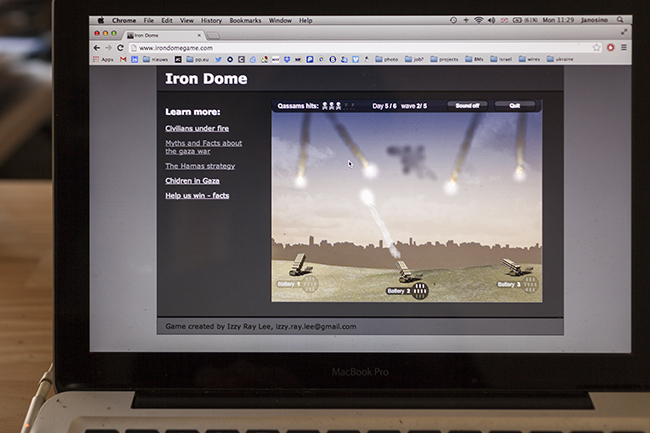 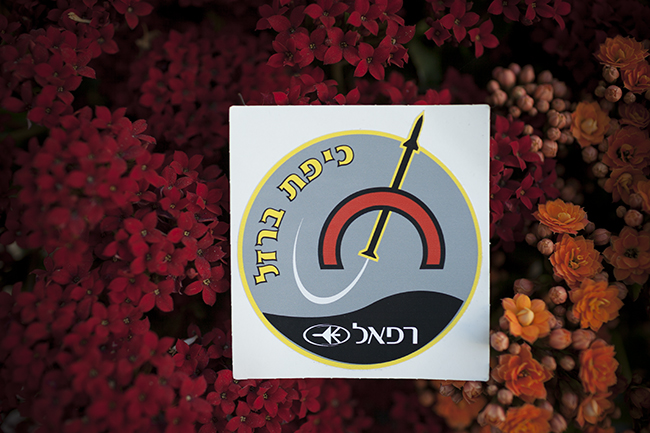