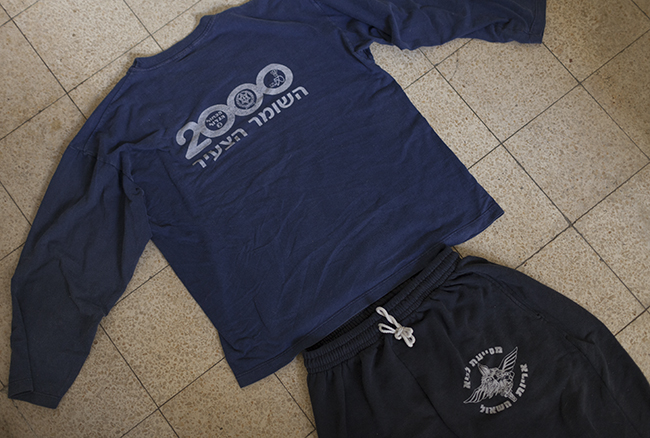 Tel Aviv, Israel – 12th of February, 2014: A youth movement shirt and army sweatpants serve as nightclothes for guests sleeping over at Avichai’s flat. Past membership in Zionist youth movements and in the country’s armed forces are both extremely common among Israelis, leaving many traces such as identification clothes from one’s army unit, training sportswear and more or less funny shirts commemorating events or anniversaries. These are usually good clothes which can last a long time and people seem to develop a certain attachment to them, as witnessed by the fact that nobody ever gives you one as a present. On the other hand, Israelis also take sleeping in a pijama very seriously, and will more than gladly offer some of these past uniforms to guest sleeping over at their house.

The shirt is from Hashomer Hatzair, a socialist-Zionist youth movement that has played an important role in the development of the Zionist movement and of early Israeli society. Established in the Austro-Hungarian province of Galicia in the year 1913, the movement was inspired by Marxist-Zionist thinker Borochov, scoutism and the German Wandervogel. Seeking to liberate Jewish youth through aliyah (emigration to Israel) and communal living according to Socialist ideals, Hashomer Hatzair founded some of Israel’s first kibbutz settlements and had 70,000 members in Europe by 1939, most of whom took part in the resistance against Nazi Germany during the Holocaust and were eventually exterminated. In its history, the youth movement was ideologically close to a some form of binational solution to the conflict with the Palestinians, and in 1942 its delegates voted against the adoption by the Zionist movement of the Biltmore Program, which officially sanctioned the establishment of a Jewish state in the Land of Israel. As a result of its socialist background and emphasis on cooperation, improving relations with the Palestinians and generic pacifism, Hashomer Hatzair is stronger among certain sectors of Israeli society and especially among the traditionally more liberal ashkenazim, with some families counting several generations of members.

Alongside growing up in Zionist youth movements, all good ashkenazi boys also serve in the army, with many joining combat units or becoming officers. Avichai’s sweatpants are a memory of his time in the IDF’s 96th Lavi Battalion, and bear the combat unit’s logo and nickname – “Lions of Hell”. Established as part of a series of unites (the 90s battallions) designed to carry out anti-terrorism operations in specific regions of Judea and Samaria, the Lavi was later merged into the Kfir Brigade, the IDF’s youngest brigade which is marked by its distinctive camouflaged beret. Units like these are at the forefront of the IDF’s daily operations in the Palestinian territories, which has led to problems due to continuous attrition with both the Palestinians and the Israeli settlers. Numerous soldiers from the Kfir brigade have been investigated for cases of abuse and human rights violations, and there have been protests against operations involving house demolitions in settlements, with a few soldiers even refusing to obey orders, something that is nearly unheard of the IDF. In an attempt to break the mould of being known as the “West Bank occupation brigade”, and the accompanying degradation of military capabilities, morale and ethos, the IDF has embarked on shifting the focus of the unit more towards conventional warfare, and away from its daily routine of arrest operations, dealing with civilian unrest and providing security to settlements.