More than ten months into the Coronavirus pandemic, social distancing is still a central element of our response to this natural event. But while last spring this fundamentally unnatural measure was mostly described as a form of “caring” for others in difficult times, the language has somewhat shifted over time, and is increasingly based on guilt and sometimes even on playing on the population’s worst instincts.

In the video above, selected in a Spanish competition for one-minute videos to educate the youth about the importance of obeying social distancing regulations (1), a young man receives a phone call by his mother while hanging out with his friends. “It’s about your grandmother”, she tells him right as he passes his cigarette to someone, “she’s very sick, she is in the hospital and she has Covid”. The mother then begins to wonder “how she could have gotten it”, making sure to add that they have all “been very careful”, whatever that means. Completely oblivious to her son’s distress at the tragic news he just received, and strangely enough for a woman whose own mother is in a hospital, she then asks him: “you haven’t been at a party, haven’t you?”. The video cuts out on the young man’s remorseful expression and adds “+1” to the cumulative number of confirmed Coronavirus infections in Spain, which is well above one million.

Coronavirus is an extremely contagious virus that basically spread and contracted through breathing, in a process that is both very hard to pinpoint and also just one element in the long chain of events and circumstances that eventually bring tens of thousands of people into intensive care units. Social distancing is a blunt instrument to temporarily disrupt this chain by keeping people away from each other’s breath in order to “flatten the curve” of contagion beneath the level our health care systems can cope with.

Over time, this grassroots response to a new pathogen developed into a strange regime of shifting emergency legislation, scientific advice, hygiene and good will, accompanied by the mountains of ill will that is inevitably generated by this kind of all-encompassing acts of biopolitics that turn people into populations and do not take into account the complexities of society or individual circumstances. Just as inevitably, these rules are flouted on a regular basis by everyone and especially by the youth, as all of these videos more or less openly acknowledge – this is what made them necessary in the first place.


These videos also implicitly admit that the link between the infringements they depict and the dire sanitary consequences that they also depict, sometimes quite graphically, is not automatic, and to a certain degree due to bad luck, as symbolised by the choice of a Spanish nursery rhyme in one of these videos.

This degree of luck is the narrative depiction of the countless factors that play a role in a complex event such as a pandemic, in which seemingly trivial things that we might or might not understand, or even not know at all, can have huge effects that accumulate across sectors of society, classes, geography and much more. Individual and collective behaviours such as having more social life rather than less, or a regional obsession with aperitivo as is fittingly depicted in the last video by Veneto’s regional government, can have significant effects during a pandemic, and these videos are attempts to talk about these issues in order to change the behaviour of the population.

Blending reenacted footage with real images of intensive care units and pixelated partying kids, these videos can be seen as contemporary propaganda (2), and like all propaganda they tend to simplify complex events in order to sustain a collective response. In this case the response is the “struggle against the virus”, which goes from what happens in intensive care units to the everyday behaviour of population, and these videos make the connection between the two by essentially depicting the former as a direct consequence of the latter.

Social distancing began as a temporary sacrifice to deal with the intrusion into our lives and our societies of a new element from the natural world. As such, it was never meant to be complete nor permanent, and it was inevitable that within a few months a combination of habit, fatigue and changing attitudes towards the virus would lead to less social distancing, also in the context of the relaxation of restrictions and of their enforcement. By making a direct connection between individual behaviour and death, these videos are part of a wider narrative that sees this relaxation as the main cause of the just as inevitable second wave of the pandemic, mixing causes with consequences and conveniently ignoring all the other factors that created this pandemic and made it so catastrophic.

At least here in Italy, this guilt-based narrative is very present in our collective experience of the pandemic, and it has taken a life of its own, with politicians and commentators making direct connections between the level of compliance with social distancing regulations and the evolution of the pandemic, and an endless succession of emergency decrees (3) that is beginning to feel like a strange negotiation between the authorities and the population in which the way we “behave” on Christmas determines whether we get another lockdown in January or not. 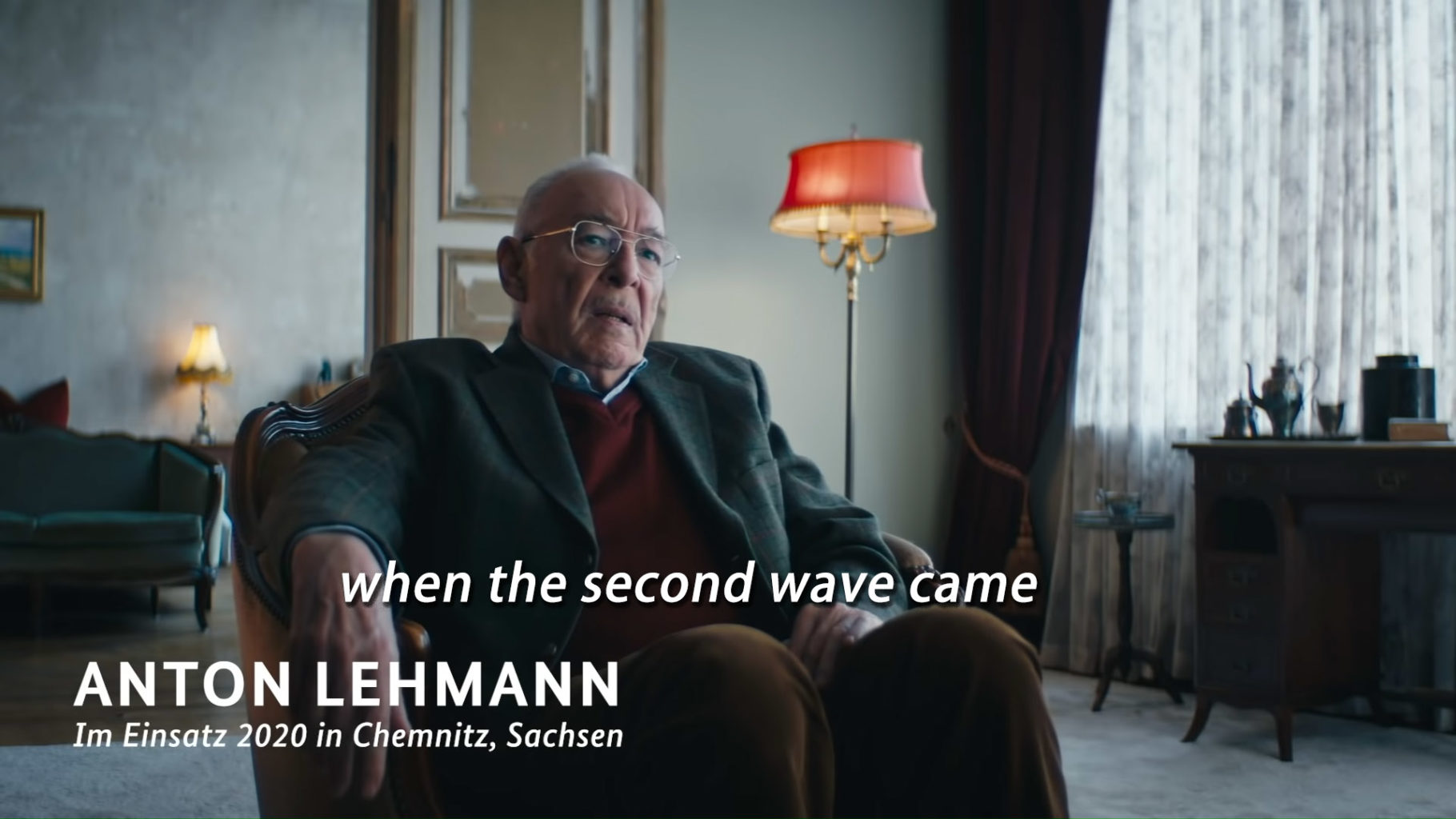 
At the core of this narrative, and of most policies implemented by governments all across the world, there is the idea that this strange situation is only temporary, although sometimes it is called “the new normal”, and that it will end as soon as the problem of the pandemic is solved, presumably through mass vaccination. This is especially visible in one of the most acclaimed of these pieces of contemporary propaganda, the recent #besonderehelden (special heroes) campaign by the German federal government.

In three fictional interviews shot long after the pandemic has ended, several former young Germans remember life under lockdown, explaining how they saved the country by staying at home “during the winter of 2020”. It’s obviously all a bit of a joke, and the account of the pandemic ends up being quite specific, mostly referring to young people who really don’t cook, live in vast, comfortable houses, and can also spend weeks at home watching TV and eating junk food.

The last of these videos even features a student who is simply too lazy to do anything but play video games all day, which hints at another one of the underlying truths of this pandemic: that millions and millions of people are spending disproportionate amounts of time online, especially among the youth. It is not something anybody likes to talk too much about, but these days the trend is openly embraced by both the wider society and by the authorities, as for example when Britain’s Scientific Adviser Group for Emergency advises the government to give “free mobile phone data, streaming and gaming” to young people in order to increase “adherence to COVID-19 preventative behaviours”, or when the German government publishes a video that jokes about staying at home to play video games while eating cold ravioli “straight out of the can”.

A pandemic is a complex event that brings together countless factors and variables, connecting historical trends and practices with present situations and policies. Complex events such as these will only become more frequent as we venture into an age of environmental change, proliferating pathogens and socio-economic transformation, and the debates that surround these issues can be seen in terms of problem setting and problem solving, with conflicting narratives on what is happening and what to do about it. These debates take place in the context of what is known as an “infodemic”, the perfect storm of disaster, social media, and sensational media coverage endlessly fed by self-sustaining loops of algorithms, clickbait and catchy content such as these videos.

In this mess, what began as a temporary measure to deal with an unexpected emergency becomes the cause of the problem itself, shifting the debate from the wider causes of the emergency, and from the systemic solutions to deal with this and the many other emergencies that we face, to temporary fixes such as social distancing and then to surreal ideas such as preventing young people from socializing or wondering whether it’s a good idea to spend several months of our lives on our couches. 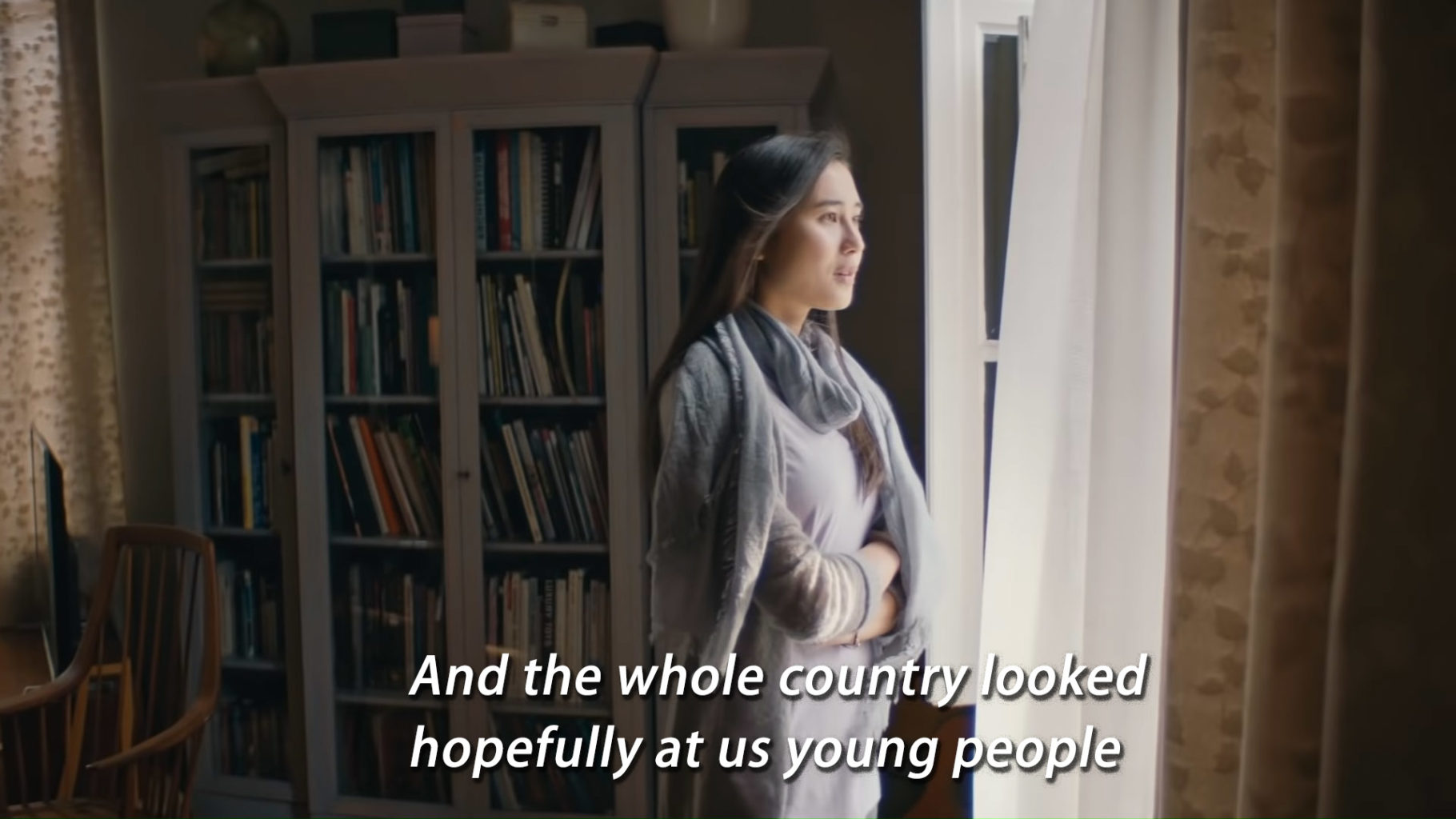 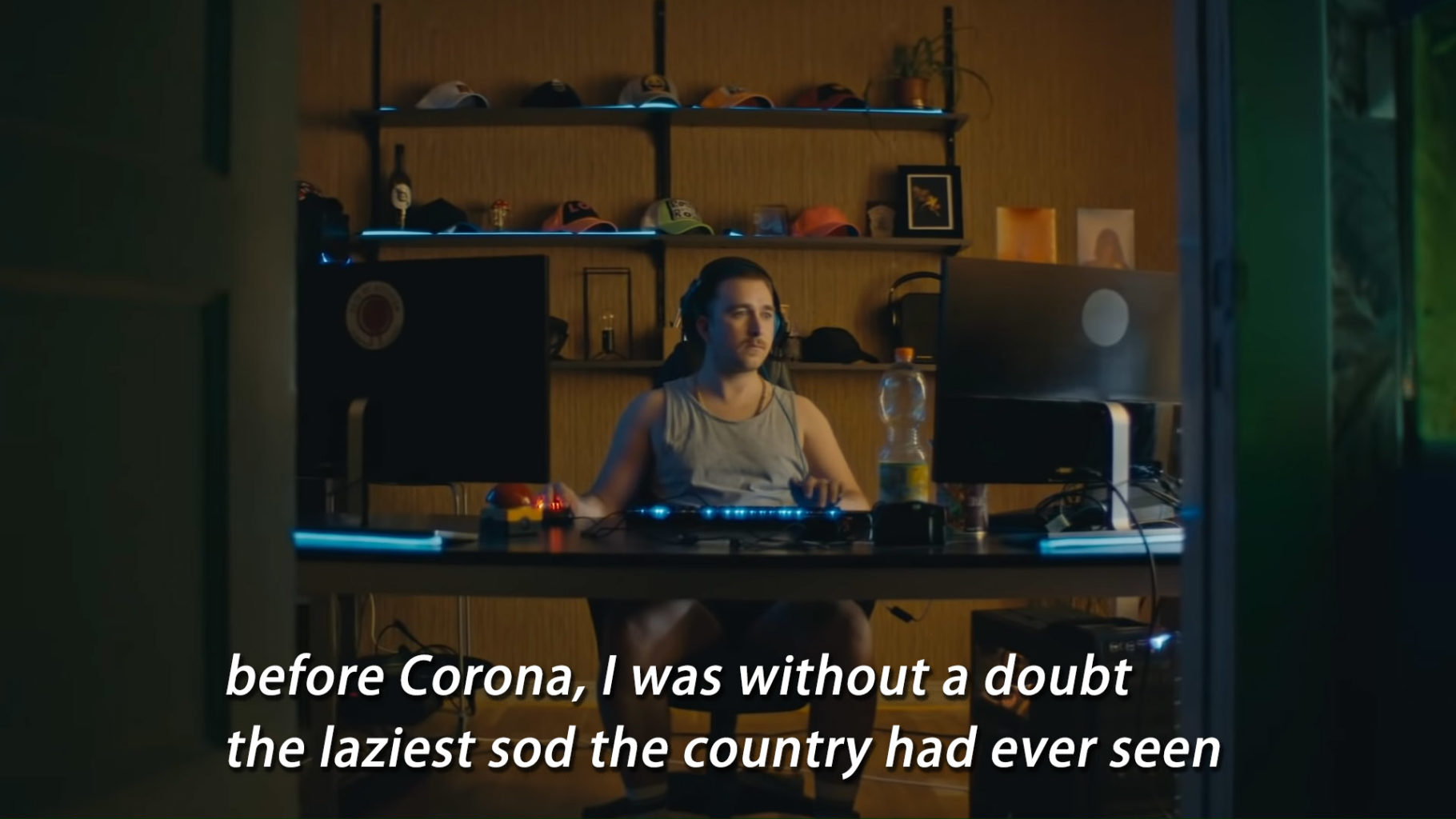 (1) The winners and special mentions of this competition put together a true repository of short videos about the Coronavirus pandemic, which includes a beautifully shot thriller that sees a young girl shooting her father during lunch and footage of the authors of one of the videos not complying with social distancing regulations.


(3) The DPCM (Decrees of the President of the Council of Ministers) are temporary laws made by the prime minister, which theoretically should be approved by parliament within 60 days. We have had more than twenty since the beginning of the pandemic, with an average of one decree every two weeks. The overwhelming majority of the population is completely unaware of which DPCM is in place at any given time or which activities it restricts, and young people mostly experience these decrees through memes. 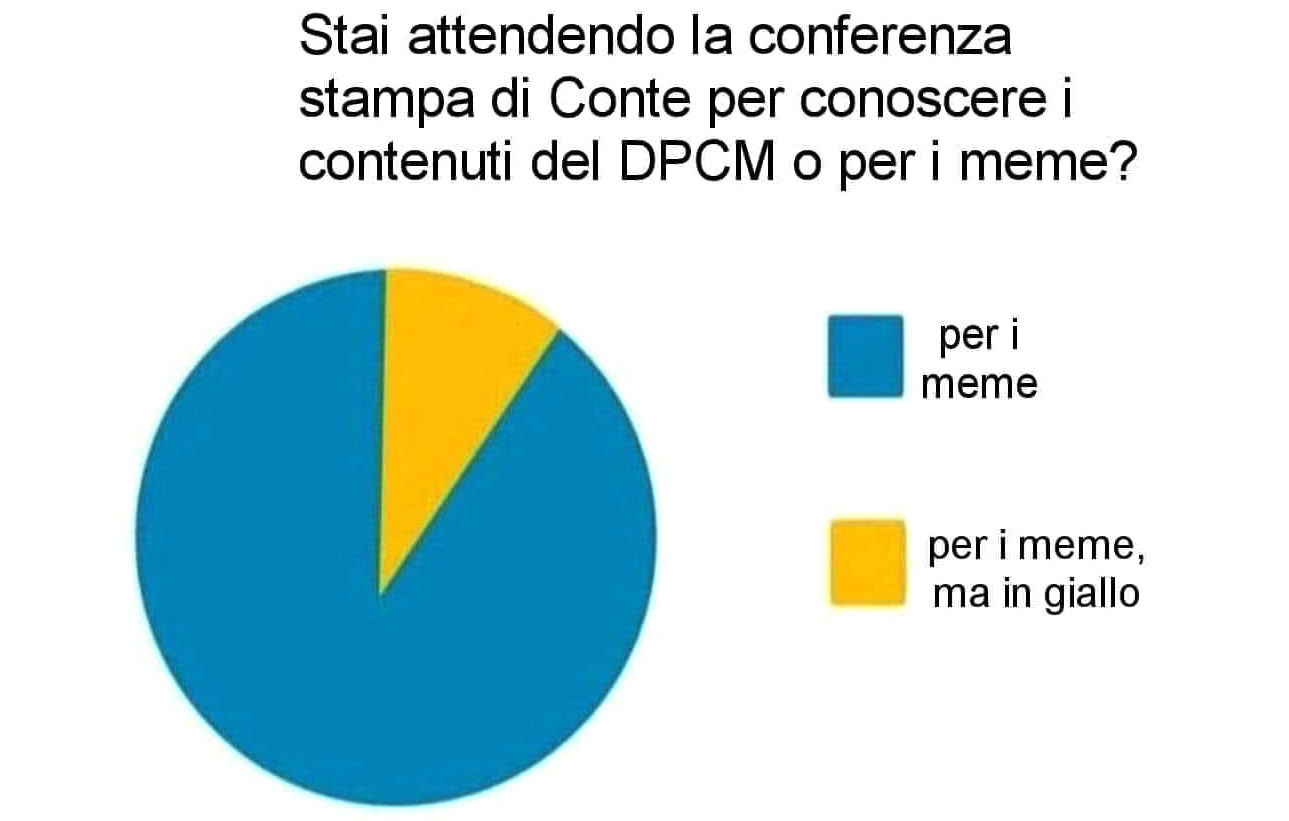 “Are you waiting for the prime minister’s press conference to find out the contents of the DPCM or for the memes?”

“for the memes,
but in yellow”