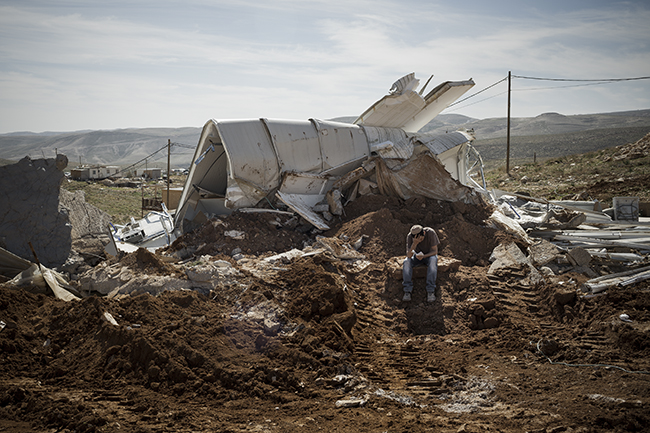 Ma’ale Rehavam outpost, Judea and Samaria – 2nd of February, 2013: Praying on the rubble of a caravan (portable house) in the Ma’ale Rehavam outpost hours after its demolition by Israeli authorities. At 8:00 a.m. a large police force showed up and without producing any demolition order or giving any explanation proceeded to demolish some eight caravanim, making about a dozen people homeless. Apparently, the houses had been built a few hundred meters beyond the boundaries of this tiny outpost on the Judean Hills, 8 kilometres beyond the 1948 Green Line which on paper separates the settlements from Israel.

With no prior notice or any court proceedings, the demolitions shocked the residents of Ma’ale Rehavam, some of whom even seemed unaware of their house being illegal, and became a rallying cry for those in the settlement movement who struggle against the efforts of the Israeli state to restrain and control its activities. Youth from the settlements protested forcefully in front of the Knesset (Israel’s parliament) and blocked roads leading to Jerusalem and to Ramallah, attacking several Palestinian cars and scuffling with the police which dispersed them and carried out two arrests. 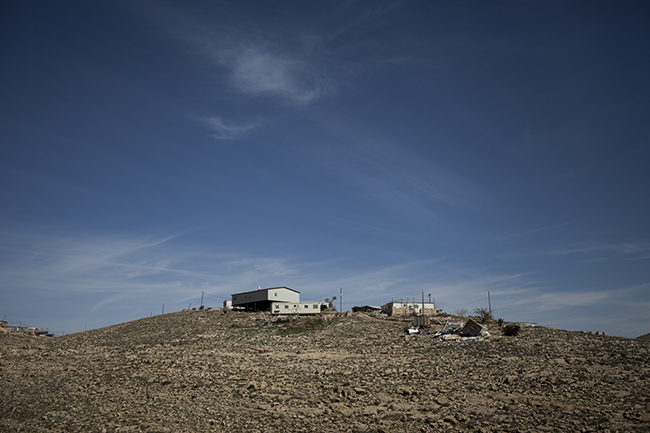 Sitting at the op of some empty hills originally zoned for the nearby Nokdim, a settlement founded by people from the equally nearby Tekoa, Ma’ale Rehavam strives to be a communal, self-organized eco-village, inhabited by an unusual mix of religious and secular Jews, mostly of very young age. Established in 2001 as a Zionist response to the assassination by the PFLP (Popular Front for the Liberation of Palestine) of Israeli minister Rehavam Ze’evi, Ma’ale Rehavam was founded by Amana, the largest settlement organization, the Gush Etzion Regional Council, the settlement division of the Jewish Agency and “private individuals”, with the aim “to populate the wilderness and help it blossoms”.* 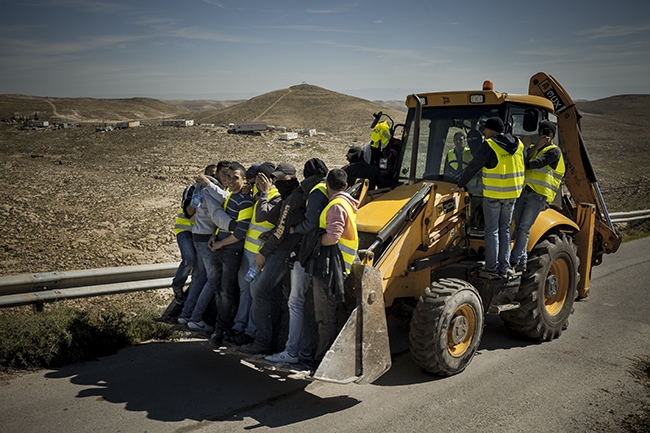 As with most of the construction work both in Israel and in the territories, also most house demolitions are physically carried out by Palestinian workers, a move which obviously incensed the people of Ma’ale Rehavam, some of whom strongly argued that such things should not happen in what is supposedly a Jewish state. While the larger settlements were built using Palestinian workers, and in some cases continue to employ, the smaller outpost often try to stick to the “avodah ivrit” principle, which believes in the creation of self-sufficient, independent and separate Jewish yishuvim (rural communities). 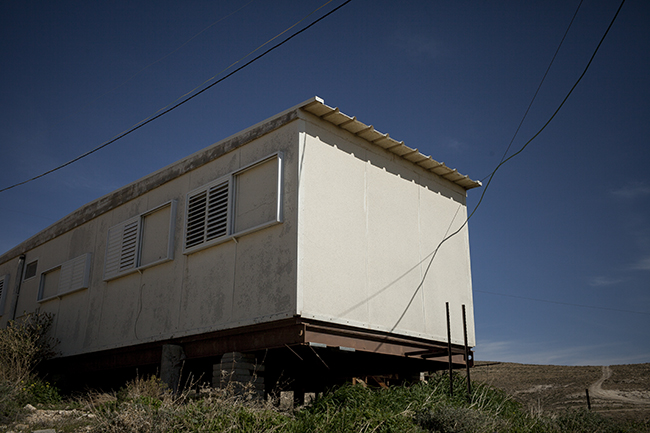 The demolished homes were caravanim, temporary housing often rented out by Israeli organizations such as Amana, which then reinvest the money in supporting the settlement movement. Throughout the country’s history, the caravanim have been and still are not such a rare feature of life in Israel, with entire communities made entirely of them. It is not uncommon to meet people who have spent large parts of their lives in them, or to hear stories about people going to “the north”, which usually means the Golan Heights, or to the desert to “live for a bit in a caravan” in the vast array of youth villages, communal settlements, kibbutzim and religious communities which seek to populate Israel’s periphery. 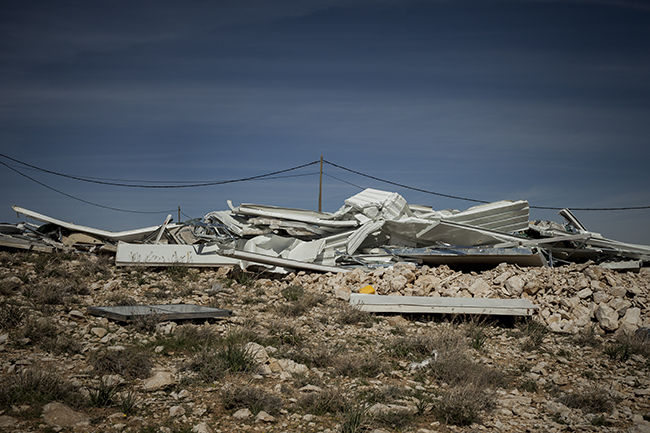 House demolitions do sometimes happen in the outposts erected on lands whose ownership is contested, with the residents locked in continuous legal battles with the government, the Bagaz (Israel’s supreme court), Palestinian residents and land-owners or Israeli NGOs. In 2009, the newspaper Ma’ariv was condemned to pay 12,000 shekels (about 2800 euros) to the residents of Ma’ale Rehavam for having falsely claimed their houses were built on private Palestinian land. Shortly after the demolitions an injunction was granted by the Supreme Court, suspending further action until the legality of each structure is decided upon. 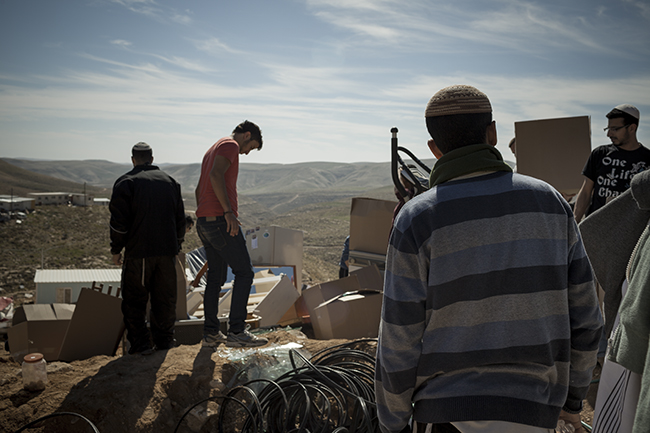 Numerous youth came from nearby settlements to help out in salvaging the belongings of the demolished home’s residents, which had been in some cases dumped out by the Israeli riot police which enforced the demolition orders. Some explained the demolitions as a goodwill gesture to president Obama, who was due to do his first visit to Israel as US president a few weeks later and is regarded by many as hostile to the settlement movement. Other simply blamed Prime Minister Netanyahu, whom they perceive as a political opportunist, or took the demolitions as yet another sign of how astray Israeli society has gone, itself one of the reasons for which many of them moved to such outposts in the first place. 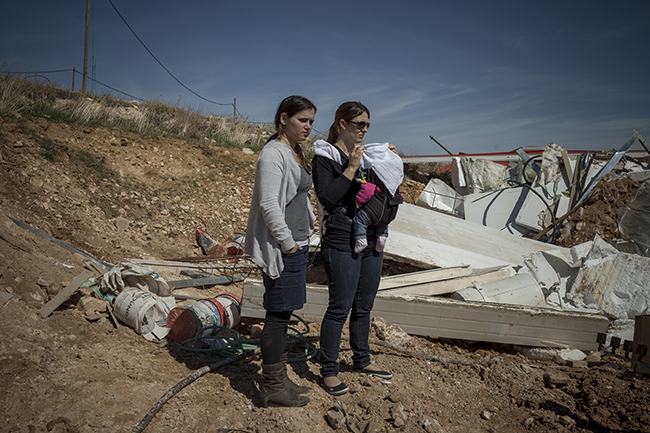 Shira (left) contemplating what is left of her caravan, which she had purchased a few months before by taking a mortgage with her husband Nachman, with both of them in their twenties and living on their own. “You know, people who live here are really not rich”, commented one of Shira’s friend who had come to help her take care of their young child. As is often happens in Israel, the question arose of whether it’s such a good idea to live in the Medinat Yehudi (Jewish State)after all, a common feeling among the settlement movement, which in some way is growing increasingly rebellious against the institutions of the State of Israel. 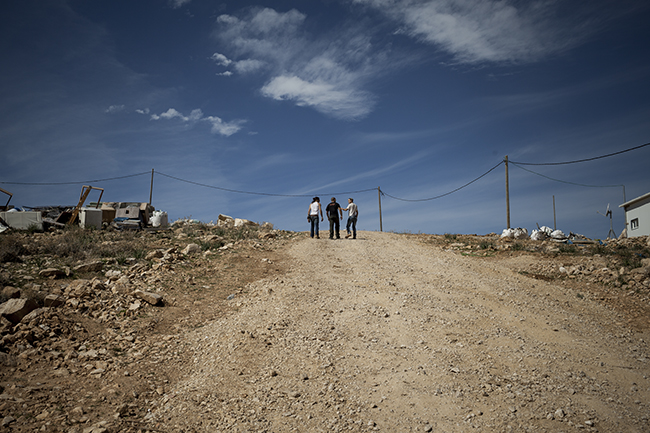 Youth from the nearby Tekoa walk among the demolished homes, commenting that “this would not happen in our yishuv”, which is much more well known in Israel and whose residents refrain from setting up new outposts and have instead established Tekoa Bet, Gimel and Dalet, after the letters of the Hebrew alphabet. Reading in the news about house demolitions in places like Tekoa or Ariel is in fact almost an impossible thought, although Israel does sometimes demolish in the larger settlements, even dismantling entire communities in Gaza and northern Samaria in 2005 or in Sinai in 1982. 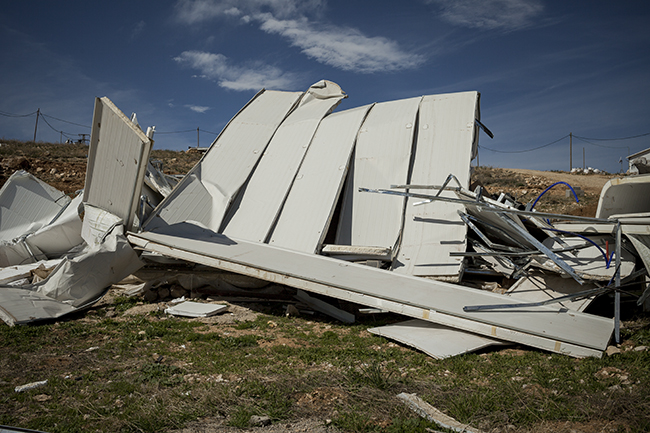 In the legal wilderness that is Area C, the territories under exclusive Israeli control, with its patchwork of lands owned or inhabited by Palestinians, closed military zones and state lands appropriated after the occupation of 1967, demolition orders are a frequent thing which can always happen for a variety of reasons. To a certain extent, they are somehow accepted and the houses are simply rebuilt, in the hope that the government will recognize the settlement at some point. After the early pioneering decades of the Zionist project, settlement expansion has become a tool in the hands of the various Israeli governments, which use it accordingly to the contingencies and sometimes choose to contain it. 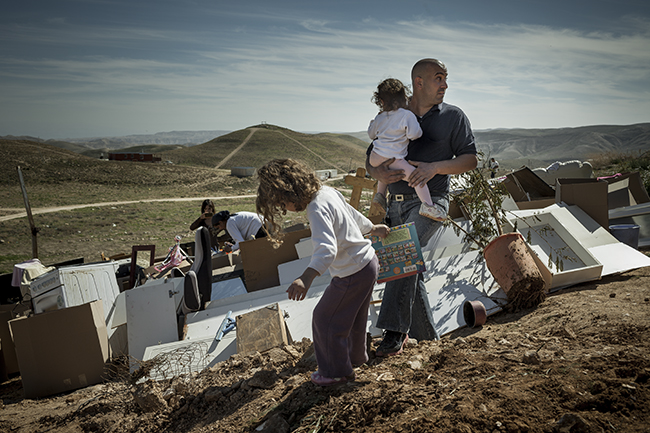 As with many of the things that make up the the Zionist project on the ground, settlements take many forms and involve many different people with different backgrounds and possibilities. While many of the larger yishuvim were established by the state, often as Nahal military settlements, which actively supported people to move there, today’s outpost are regarded as “unauthorized”, and their inhabitants are much more exposed to changes in government’s policy, which sometimes contradict the formal allegiance to all Zionist activities displayed by most Israeli politicians from left to right. 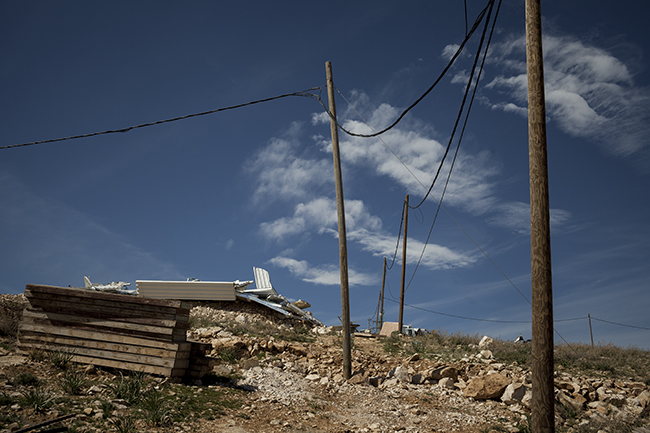 Even before the demolitions, Ma’ale Rehavam’s relationship with Israeli authorities appear to be complicated to say the least, beginning with the lack of any approval by the government or the Defence Ministry, which is in charge of Area C through the Civil Administration of Judea and Samaria. A plan for the development of the area, originally zoned for the expansion of Nokdim, is still absent with even a partial planning proposal rejected by the Defence Ministry, which has also repeatedly delayed linking the outpost to the electricity grid. 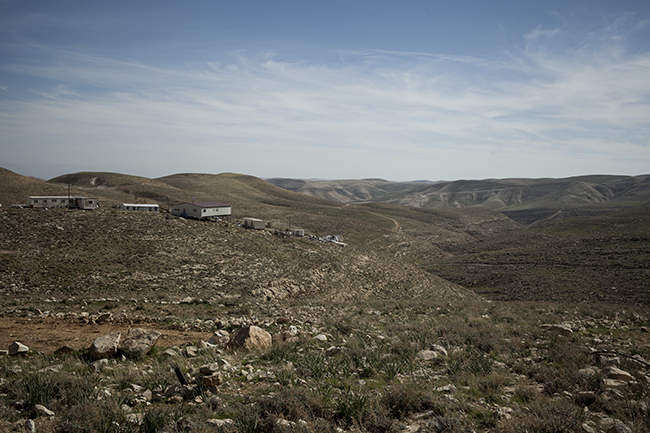 Pointing at the empty hills which roll around the settlement as far as the eye can see, especially to the east where the valleys descend towards the Jordan Valley, the residents of Ma’ale Rehavam argued that they are not taking anybody’s land, with one of them wondering in an open letter to Prime Minister Netanyahu if the reason for the demolitions was to be found in the authorities’ desire to speculate on the outpost and in its construction. At the time of writing, the Israeli government is examining ways to retroactively “authorize” Ma’ale Rehavam and three other “unauthorized” yishuvim.

* From the Ma’ale Rehavam page on the Gush Etzion website.